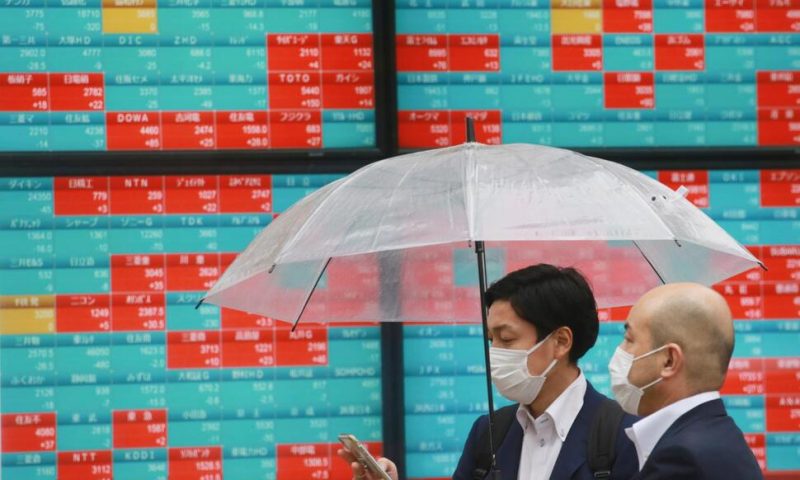 Shares are mixed in Asia after an up-and-down day on Wall Street ended with most benchmarks lower as traders waited for updates on inflation and corporate earnings.

Shares were mixed in Asia on Wednesday after an up-and-down day on Wall Street ended with most benchmarks lower as traders waited for updates on inflation and corporate earnings.

Hong Kong was closed for a holiday.

Markets have been choppy for weeks as investors try to figure out how the economy will continue its recovery with COVID-19 remaining a threat and rising inflation potentially crimping consumer spending and corporate finances.

China’s producer price index is due out on Thursday. Economists have forecast a surge of over 10% year-on-year, up from 9.5% in August.

Investors also will be closely watching updates on inflation from the U.S. Labor Department, which will release its Consumer Price Index for September on Wednesday.

It is a gauge of how inflation is pressuring costs for consumers. Additional information on inflation pressures for businesses is due Thursday when the Labor Department releases its Producer Price Index.

Prices for oil and other energy have surged along with costs of other commodities. Shortages of semiconductors have meanwhile slowed output of many high-value industrial goods such as cars and consumer electronics.

Small company stocks, a gauge of confidence in economic growth, fared better than the broader market, driving the Russell 2000 index 0.6% higher to 2,234.27.

The pullback in the S&P 500 marked the index’s third straight decline. After two days, the index’s losses have offset its 0.8% gain last week.

The yield on the 10-year Treasury fell to 1.58% from 1.60% late Friday. The bond market was closed on Monday for Columbus Day.

The coming round of earnings reports will give Wall Street a clearer picture of how companies fared in the most recent quarter amid a surge in COVID-19 cases. It will also shed some light on how they expect to perform through the rest of the year.

S&P 500 companies are expected to post 27.6% annual earnings growth for the July-September quarter, according to FactSet. That’s down from 28.1% growth estimated by analysts in July.

JPMorgan Chase will kick off earnings for banks on Wednesday. Bank of America, Wells Fargo and Citigroup will follow with their latest quarterly results on Thursday.

Many industries are feeling the pinch from rising inflation with higher costs for shipping and raw materials. Companies are warning that their financial results could suffer because of the supply chain problems.

The supply chain crunch has also raised prices on many goods for consumers, which could hurt consumer spending and further stunt the economic recovery. Investors will get an update on consumer spending when the Commerce Department releases its retail sales report for September on Friday.

In other trading, U.S. benchmark crude oil lost 16 cents to $80.48 per barrel in electronic trading on the New York Mercantile Exchange. It gained 12 cents to $80.64 per barrel on Tuesday.

Brent crude, the international standard, declined 16 cents to $83.26 per barrel.