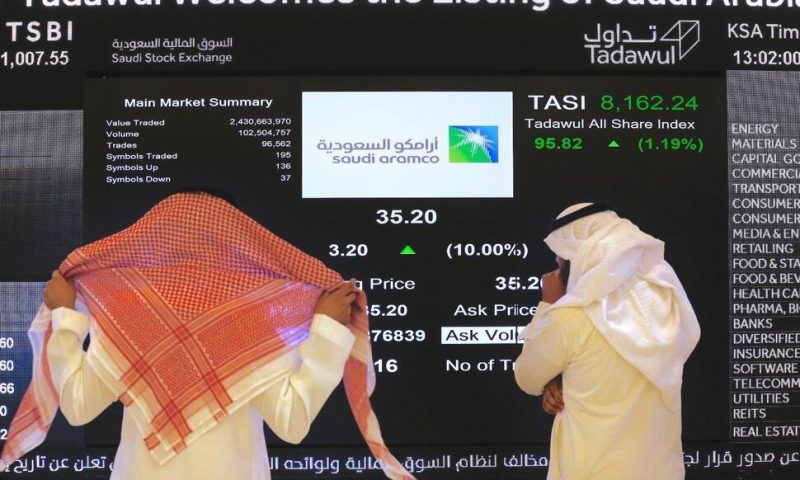 Its market cap value puts Aramco just behind Microsoft and Apple as the world’s most valuable company. It comes as crude oil prices climb to over $82 a barrel, the highest in seven years.

Demand for energy is picking up, despite the ongoing coronavirus pandemic’s continued toll on travel and other key gas-guzzling sectors.

Aramco is mostly owned by the government of Saudi Arabia, with just under 2% of the company publicly listed on the Saudi Tadawul stock exchange. Aramco was trading at around 37.6 riyals a share, or a few cents over $10 a share, by midday Wednesday before dipping to 37.2 riyals a share, or around $9.92 a share. It remains to be seen whether it can hold this rally until trading closes.

Saudi Crown Prince Mohammed bin Salman was the architect behind the effort to publicly list a sliver of Aramco in late 2019, touting it as a way to raise capital for the kingdom’s sovereign wealth fund to then develop new cities and mega-projects across the country that create needed private sector jobs for young Saudis. The crown prince has long sought the mammoth $2 trillion valuation for Aramco.

Despite fluctuations in Aramco’s yearly earnings, the company has stuck to its promise to pay an annual dividend of $75 billion until 2024 to shareholders, the biggest of which is the government.

The oil carter and other allied major oil producers this week are maintaining a gradual approach to restoring production levels that had been slashed during the pandemic, agreeing to add only 400,000 barrels per day in November.

Demand for oil is forecast to hit 99 million barrels per day by the end of the year, and a little over 100 million per day next year.

Aramco raked in a net income of around $47 billion in the first half of 2021, double what it earned over the same period last year when the coronavirus grounded travel and pummeled global demand for oil. This put Aramco back squarely where it was before the pandemic struck and sunk earnings.