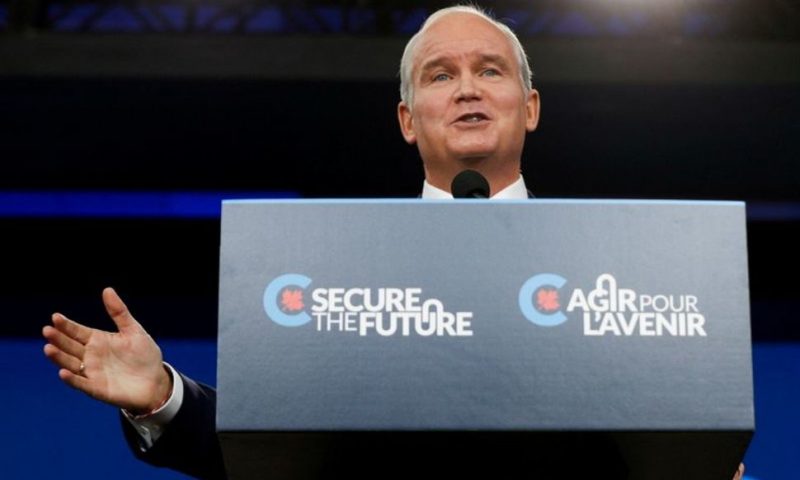 OTTAWA – Canada’s main opposition Conservative Party set out its election platform on Monday, with Prime Minister Justin Trudeau’s top rival pledging to bring back jobs lost to the COVID-19 pandemic and to balance the federal budget within 10 years.

Conservative leader Erin O’Toole, speaking on the first full day of campaigning ahead of the Sept. 20 vote, also said he would scrap the governing Liberal Party’s national daycare plan and again opposed a vaccine mandate for federal government workers.

“We want to help get all people back to work, in all sectors and all regions,” O’Toole told reporters. “There are thousands of small and medium-sized businesses … hanging on by a thread. So our plan will secure those jobs, help them thrive and that will help us get a growing economy.”

Trudeau launched the campaign on Sunday, two years ahead of schedule, hoping that high vaccination rates and a post-pandemic economic rebound will help him regain a parliamentary majority.

O’Toole, speaking in Ottawa, vowed a Conservative government would recover a million jobs lost during the pandemic within its first year in power. Employment in Canada remains about 246,000 jobs short of pre-pandemic levels.

The election platform also promised billions in spending to prop up the economy and bolster the recovery from the COVID-19 pandemic, while limiting new structural spending in order to balance the budget within a decade.

It did not provide cost details, with O’Toole saying they were waiting for Canada’s budgetary watchdog to finish vetting the numbers.

Trudeau, who was campaigning in the Montreal area, promised if re-elected to extend emergency supports for businesses and workers, and outlined a suite of new programs for hard-hit industries.

Jagmeet Singh, leader of the left-leaning New Democratic Party, said he would claw back executive compensation paid out by companies who also took government pandemic supports.

O’Toole promised to immediately cancel the C$30 billion ($23.9 billion) national childcare program launched by the Liberals, which would end deals with eight provinces and territories. Instead, he pledged to give parents bigger tax credits.

The Conservatives also took aim at Canada’s hot housing market, saying they would boost supply by building a million homes over three years and ban non-resident foreign investors from buying for two years, while also promising to loosen mortgage requirements for some Canadians.

Trudeau’s Liberals lead nationally with 35% of the vote compared with 30% for the Conservatives and 19% for the New Democrats, a Leger Marketing poll showed on Aug. 12.

Japan Ekes Out Economic Growth in Recovery From Pandemic