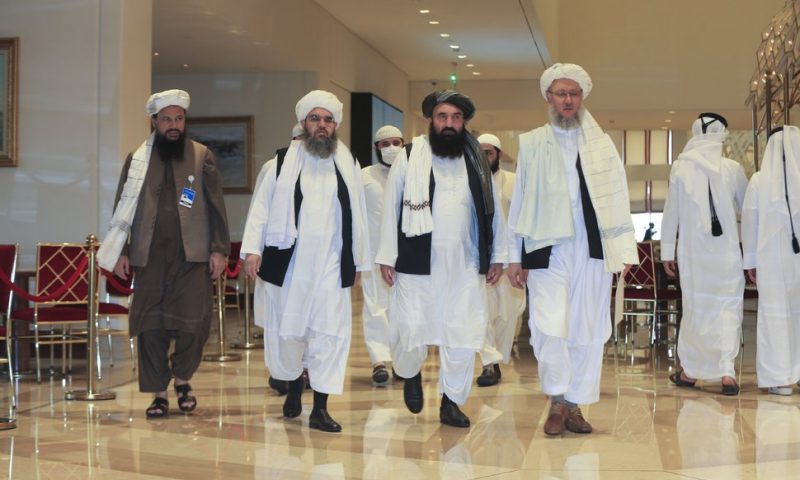 The move comes at the expense of the U.S., which has held up the Taliban’s international legitimacy as its remaining source of leverage while the militant group storms across Afghanistan.

China is prepared to recognize the Taliban as the legitimate ruler of Afghanistan if it succeeds in toppling the Western-backed government in Kabul, U.S. News has learned, a prospect that undercuts the Biden administration’s remaining source of leverage over the insurgent network as it continues its startling campaign to regain control.

Beijing has publicly pressured the Taliban to continue working toward a peace agreement with President Ashraf Ghani’s government – an outcome China appears to genuinely prefer and one the U.S. has pressed with growing urgency. However, new Chinese military and intelligence assessments of the realities on the ground in Afghanistan have prompted leaders in the Chinese Communist Party to prepare to formalize their relationship with the insurgent network, according to multiple U.S. and foreign intelligence sources familiar with the Chinese assessments.

The move comes as the Taliban has been routing Afghan forces – as of Thursday afternoon it had overrun 10 major provincial capitals, including one near Kabul, sometimes uncontested, along with key territory that connects with China’s border. And it also undermines U.S. attempts to try to pressure the insurgent group to return in good faith to diplomatic negotiations in Doha, Qatar, where America’s envoy returned this week for new talks.

“If the Taliban claim to want international legitimacy, these actions are not going to get them the legitimacy they seek,” White House spokeswoman Jen Psaki said Friday. “They could choose to devote the same energy to their peace process as they are to their military campaign. We strongly urge them to do so.”

The Chinese Ministry of Foreign Affairs did not respond to requests for comment.

At stake for Beijing are agreements it has already secured from the Taliban not to harbor inside Afghanistan any Islamic extremists with designs to wage insurgencies in parts of western China, notably the restive Xinjiang province – a promise that far exceeds anything the U.S. has been able to extract with regard to the persistent threats of al-Qaida operatives partnered with the Taliban.

Any sort of stability in Afghanistan would also allow China to reap the benefits of prior economic investments in the region, including mineral rights in Afghanistan. Buried in the latest report from the U.S. inspector general overseeing reconstruction in Afghanistan was a little-noticed observation that China has dramatically increased its economic interests in Afghanistan recently, encouraging the completion of a road in the Wakhan Corridor – the sliver of land connecting the two countries. It cited an Afghan Public Works Ministry spokesperson who said, “China has expressed a huge interest for investment in Afghanistan, particularly in the mining sector, and this road will be good for that, too.” The Taliban recently seized wide swaths of that territory as part of an apparent campaign to control Afghanistan’s northern border crossings.

China also seeks stability in Afghanistan for the sake of regional infrastructure projects it’s already pursuing in neighboring Pakistan as a part of similar investments globally known as the Belt and Road Initiative.

Indeed, Pakistan appears at the center of the growing relationship between China and the Taliban, with Beijing relying on it for interpreting the cultural and linguistic divide. Pakistan in turn has come under increased Chinese influence through the growing number of economic investments Beijing has funded there, notably the China-Pakistan Economic Corridor or CPEC that flows through regions in the north where Taliban networks have sought refuge – apparently with at least some complicity from Pakistan’s influential military.

Pakistan’s contributions to the instability in America’s longest war zone are not lost on the Afghans, nor on those who follow the conflict closely. A seemingly benign tweet from the U.S. Embassy in Kabul soliciting suggestions for the agenda at the new Doha talks wrought near-unanimous replies and a trending hashtag: #SanctionPakistan

The fall of Kabul is not guaranteed, as American officials continue to insist. And in a call two weeks before the high-profile summit, Chinese President Xi Jinping assured Ghani of “China’s firm support of the Afghan government.” But the Taliban’s onslaught has privately surprised the Biden administration with its speed and apparent success, officials familiar with internal deliberations say.

The Defense Department restarted in recent days a bombing campaign against Taliban positions in support of the pro-government ground forces, though Pentagon spokesman John Kirby said Wednesday the authority to do so expires with the planned full withdrawal of U.S. forces by the end of the month. And on Tuesday, President Joe Biden showed no signs of a willingness to reverse his decision for a full withdrawal.

“I think they’re beginning to realize they’ve got to come together politically at the top,” Biden told reporters at the White House, referring to the U.S.-backed government in Kabul. “We’re going to continue to keep our commitment. But I do not regret my decision.”

With this deadline in sight, China has begun preparing for what it considers more realistic contingencies that would grant both Beijing and the Taliban what they seek in the near future. It’s a prospect met with little surprise from those who study the region closely.

“If you suspect there’s a good possibility that a new government is coming to power, it’s potentially useful to set conditions such that if those folks succeed in taking power, you’re well positioned to extract a bargaining concession from them,” says Tyler Jost, a professor at Brown University who studies Chinese national security decision-making. “In this case, any potential connections between Islamist groups and Xinjiang would likely be front and center in the minds of Chinese decision-makers. It’s such a central priority for them.”

Chinese Communist Party officials have held increasingly frequent and visible engagements with Taliban leaders – including a high-profile summit two weeks ago in the northeastern coastal city of Tianjin – in which they ostensibly touted the need for them to participate in the U.S.-backed peace process in Doha.

It’s unclear whether this or other Chinese delegations have communicated their intentions explicitly to the Taliban, though the insurgent network’s brazenness in recent weeks suggests it sees the American threats of international isolation as inconsequential.

It also remains to be seen whether the Taliban will follow through on their promises to deny safe haven to foreign fighters after spending two decades refusing American demands for similar concessions about al-Qaida. China, however, is not saddling the Taliban with the lofty bureaucratic expectations the U.S. and its Western partners have for Afghanistan’s future.

“Beijing doesn’t necessarily place the same emphasis on factors the U.S. sees as central to the future of Afghanistan, such as sustaining democratic elections or human rights,” Jost says. “Traditionally, Beijing doesn’t emphasize either in its diplomacy – or at least does not do so with the same definitions that the U.S. employs.”

It remains unclear whether China’s intentions with regard to the Taliban will grant it what it seeks, says Yun Sun, director of the Stimson Center’s China Program, who documented relations between the two in a thorough analysis published this week on the national security website War on the Rocks.

Afghanistan may well collapse into a protracted civil war, Sun says, which would undercut the arrangements that China or any other foreign power seeks there.

What is clear from China’s latest moves, however, is that the shifting U.S. goals for Afghanistan have not succeeded.

Adds Sun, “Fundamentally, what’s implied is that the recognition of the legitimacy of the Taliban equates to the total failure of the 20 years of war by the U.S. in Afghanistan.”

Migrants Find Themselves Stranded Abroad by New US Policy