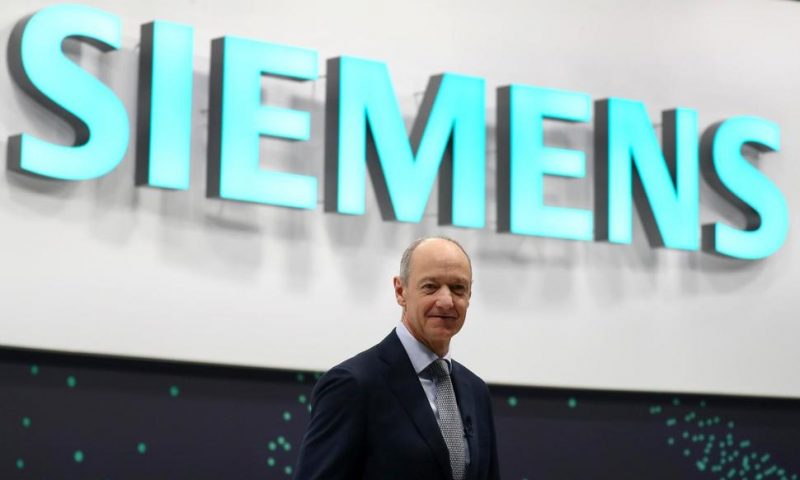 Germany’s Siemens AG is one of the weather vanes for the global economy and the Munich-based company says things are looking up.

FRANKFURT, Germany — Germany’s Siemens AG raised its outlook for the year Thursday, joining other major European industrial companies in signaling that the economic recovery from the coronavirus pandemic is gathering pace despite parts shortages and concerns over the spread of the delta variant.

Rebounding global demand for infrastructure and manufacturing software led to a sharp increase in orders in the April-June quarter at Munich-based Siemens AG, with an order from U.S. rail company Amtrak a large contributor.

The engineering and manufacturing company raised its outlook for its fiscal year, joining Volkswagen and Airbus in raising their predictions for business performance amid a global recovery from the worst of the pandemic shutdowns in the April-June quarter a year ago.

Siemens cautioned that its business could be affected by the same shortage of semiconductors for electronic components that has forced production cutbacks among automakers. It said it was also seeing higher costs for raw materials, parts and freight services.

The company said its order book increased by 47% to 20.5 billion euros ($24.2 billion). The figure was boosted by 2.8 billion euros in contracts awarded by Amtrak for 73 trains to be built at the company’s factory in Sacramento, California.

The order book also benefitted from an order for passenger coaches in the Czech Republic and a signaling system in Taiwan. In addition, Siemens saw strong increases in orders for industrial software. Part of the current strong manufacturing demand was due to companies increasing production to fill inventories and reserves to mitigate risks that their supply chains might be disrupted.

Siemens CEO Roland Busch said in a statement that the company was benefitting from “the strong economic recovery in our key industrial verticals. These include, for example, the automotive industry, machine building and electronics, but also the infrastructure market, including areas such as power distribution, data centers and transportation.”

Siemens raised its forecast for net income this year to 6.1 billion-6.4 billion euros, from the earlier outlook for 5.7 billion-6.2 billion euros. Net profit for the most recent quarter, the company’s fiscal third, was 1.48 billion euros, up from 535 million in the year-ago quarter.

The net income figure benefited from a positive swing in income from discontinued operations, which showed a loss of 403 million euros in the year-earlier quarter.