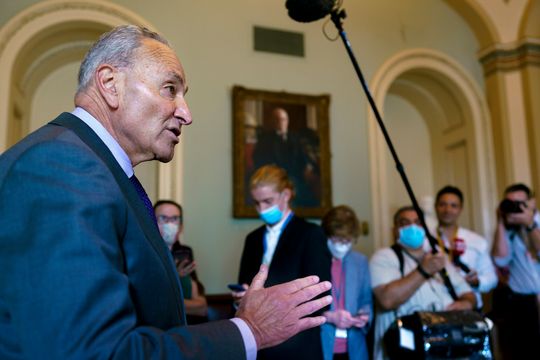 U.S. stock futures advanced on Monday, as investors eyed progress on an infrastructure bill, merger activity and a sign that central bank stimulus may continue.

“The stars have aligned for stock markets, with a stellar earnings season being complemented by record-low real yields and hopes that Congress will deliver more fiscal juice soon,” said Marios Hadjikyriacos, senior investment analyst at XM. U.S senators over the weekend concluded the text of a $1 trillion infrastructure bill.

In a speech delivered Friday night, Fed Gov. Lael Brainard suggested that the central bank won’t announce a tapering of its bond purchase program at the Jackson Hole gathering at the end of the month. “I expect to be more confident in assessing the rate of progress once we have data in hand for September, when consumption, school, and work patterns should be settling into a post pandemic normal,” she said.

The September jobs data won’t come until Oct. 8, according to the Labor Department’s calendar of releases, and the next Federal Open Market Committee meeting after that will end Nov. 3.

The next jobs report, covering July, is scheduled for release on Friday. The Institute for Supply Management manufacturing report is due at 10 a.m. Eastern.

Chinese SHCOMP, +1.97% and Hong Kong HSI, +1.06% stocks rose on Monday, and Chinese tech giant Alibaba BABA, -1.19% is due to report results on Tuesday, with its U.S.-listed shares having dropped 39% from its October peak.

European stocks SXXP, +0.38% were on track to reach a new record high.