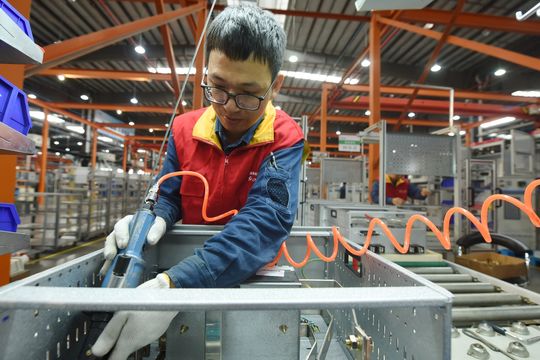 SINGAPORE — Asian stocks started the week higher Monday, even as China reported a slowdown in manufacturing activity and countries in the region continued to be hammered by the delta variant.

The gains in China follow data released Saturday by the National Bureau of Statistics showing the country’s official purchasing managers’ index fell to 50.4 in July from 50.9 in June. Numbers above 50 indicate expansion on the 100-point scale.

On Monday, a monthly manufacturing survey issued by a business magazine, Caixin, put July’s reading at 50.3. That was down from June’s 51.3.

The official figure was the lowest since February 2020, when a lockdown to prevent the spread of the coronavirus was in place. Analysts had expected a smaller easing of manufacturing activity.

China is also dealing with an outbreak of the delta variant of the coronavirus, which has already been running rampant in many other Asian nations.

“None of the factors for slower manufacturing and non-manufacturing growth have gone away,” Iris Pang of ING said in a report.

“In fact, more policy directions were announced on 30 July, and they are directly from a meeting chaired by President Xi. Those policies aim at solving problems to achieve long-term economic stability, which could sacrifice short-term growth momentum,” she said.

Investors are also watching a crackdown by Beijing on Chinese tech companies, even as authorities moved to soothe fears.

“Despite the long-term prospects of Chinese stocks, we think the stringency of recent regulatory actions will likely keep foreign investors on the edge for now until the sentiment starts improving,” Nomura research analysts said in a note.

On Wall Street on Friday, indexes stumbled while wrapping up another strong month. The S&P 500 SPX, which marked six straight month of gains, lost 0.5% to 4,395.26.