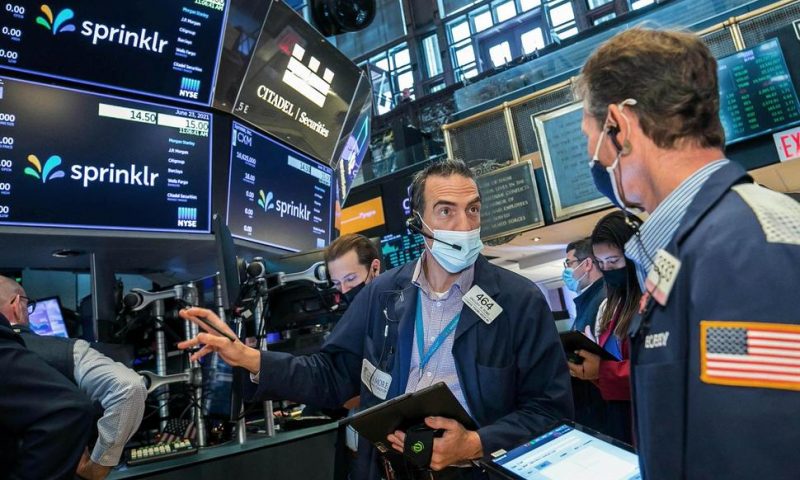 Stocks drifted to a mixed finish on Wall Street Wednesday, after tentative gains earlier in the day brought the S&P 500 back near a record high.

NEW YORK — Stocks drifted to a mixed finish on Wall Street Wednesday, after tentative gains earlier in the day brought the S&P 500 back near a record high. The benchmark index fell 0.1%, while the tech-heavy Nasdaq and a measure of small-company stocks rose. The Dow Jones Industrial Average slipped. The market is stuck in a holding pattern as nervousness washes out of the market following last week’s jolt by the Federal Reserve, which said it could raise rates by 2023, earlier than previously expected. The yield on the 10-year Treasury note edged up to 1.49%.

THIS IS A BREAKING NEWS UPDATE. AP’s earlier story follows below.

NEW YORK (AP) — Wall Street is stuck in a holding pattern on Wednesday, with the S&P 500 nipping at its record high, as nervousness washes out of the market following last week’s jolt by the Federal Reserve.

The S&P 500 was 0.1% higher in afternoon trading. It earlier meandered between a modest gain and the slightest of losses following some mixed data on the economy. It’s back within 0.1% of its record high set a week and a half ago.

The majority of stocks in the S&P 500 were rising, and the biggest gains came from companies that do best when the economy is healthy. Safer-play stocks like utilities, meanwhile, were lagging behind.

Markets have calmed notably since the Federal Reserve surprised investors last week by saying it could start raising short-term interest rates by late 2023, earlier than expected.

The super-low rates the Fed has engineered to carry the economy through the pandemic have made investing easy for more than a year. They’ve propped up prices across markets, and any change would be a big deal. That’s why the Fed’s announcement triggered an immediate drop for stocks and rise in Treasury yields.

But since then, investors have focused more on how it may be still be years before the first rate hike hits, particularly as Fed officials continue to say they see the high inflation sweeping the economy being only a temporary problem.

Before the Fed raises rates for the first time since 2018, it will likely first have to check off several items, investment giant Capital Group said in a recent report.

First, the Fed will announce that it will reduce the bond purchases it’s making to keep longer-term interest rates low. Then it will actually begin tapering, before ending tapering and then signaling that a rate hike is coming.

“That schedule will take time, and Fed officials have made it clear that they will remain patient,” said Capital Group, which runs American Funds, in its midyear outlook.

One measure of nervousness among stock investors in the market, known as the VIX, fell more than 2%. Earlier in the day, it came close to its lowest level since the pandemic sell-off began in February 2020.

Of course, if the Fed is wrong and higher inflation is longer lasting, the central bank will then have to get more aggressive about raising rates.

The latest data on inflation will come on Friday with the release of the Federal Reserve’s preferred gauge. It will cover May, which the consumer price index has already said saw year-over-year inflation of 5%.

Bond yields were holding steady following a mixed set of economic data. The yield on the 10-year Treasury held at 1.47%. The two-year yield dipped to 0.24% from 0.25% late Tuesday.

Preliminary readings on the economy in June from IHS Markit showed manufacturing is growing at a stronger pace than economists expected, but growth for services industries fell short of forecasts.

Sales of new homes in May also failed to meet economists’ forecasts. It wa the second straight monthly decline, as surging prices for homes slow activity. Besides a shortage of homes on the market, inflation has also been driving home prices higher because of increased costs for lumber and other building materials.

In Asia, Japan’s Nikkei 225 was nearly unchanged while other markets were stronger. Hong Kong’s Hang Seng rose 1.8%, and stocks in Seoul gained 0.4%.

Longtime Southwest CEO Will Step Down Next Year