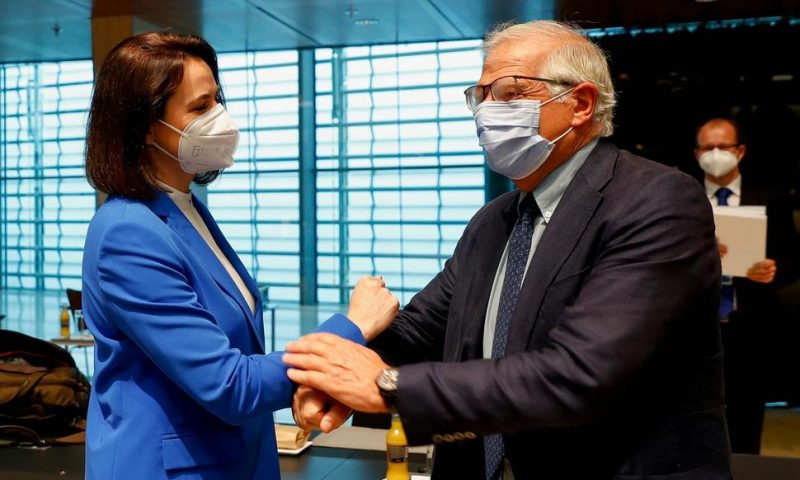 The United States, the European Union, Britain and Canada have joined forces to impose sanctions on several officials in Belarus over the forced diversion of a Ryanair flight to Minsk last month.

BRUSSELS — The United States, the European Union, Britain and Canada joined forces Monday to impose sanctions on several senior officials in Belarus over the forced diversion to Minsk of a passenger plane travelling between two EU countries last month.

Asset freezes and travel bans were also imposed on a number of officials linked to the security crackdown that continues to rock the country some 10 months after President Alexander Lukashenko was returned to power in elections branded by the EU and others as “fraudulent.”

“We are united in our deep concern regarding the Lukashenko regime’s continuing attacks on human rights, fundamental freedoms, and international law,” the four said in a joint statement.

“We are committed to support the long-suppressed democratic aspirations of the people of Belarus and we stand together to impose costs on the regime for its blatant disregard of international commitments,” they said.

The EU hit seven people and one entity over the “forced and unlawful” landing of the Ryanair plane, which was traveling from Greece to Lithuania when it was ordered to stop in Minsk, where authorities arrested Raman Pratasevich, a dissident journalist who was one of the passengers.

The four called on Minsk to cooperate with an international probe into the incident, immediately release all political prisoners, and “enter into a comprehensive and genuine political dialogue” with the democratic opposition and civil society.

Among those targeted by the United States were close Lukashenko associates, those accused of helping to violently suppress peaceful protests since last year and others alleged to have orchestrated fraud during the elections.

At a meeting in Luxembourg, EU foreign ministers also prepared a series of economic measures that are aimed at hitting Lukashenko and his allies. EU leaders are expected to endorse them at a summit in Brussels on Thursday.

The EU has gradually ratcheted up sanctions since Lukashenko – dubbed the last dictator in Europe – won a sixth term last August.

But the 27-nation bloc has taken a harder approach since the Ryanair incident, and over the country’s alleged use of migrants to pressure neighboring Lithuania, which has provided a safe-haven to Belarusian opposition figures and is one of Lukashenko’s most vocal critics.

Among their actions Monday, the ministers imposed travel bans and asset freezes on 78 Belarus officials and froze the assets of 8 “entities,” which are usually companies, banks, or associations. It means that a total of 166 people and 15 entities are now under EU restrictive measures.

“This decision was made in view of the escalation of serious human rights violations in Belarus and the violent repression of civil society, democratic opposition and journalists,” a statement said.

EU foreign policy chief Josep Borrell, who chaired the meeting, said the economic sanctions “are going to hurt … the economy of Belarus heavily.”

The measures are likely to include action against the export of potash – a common fertilizer ingredient – tobacco industry exports and petroleum products, among others.

“We will no longer just sanction individuals. We will now also impose sectoral sanctions — meaning that we will now get to work on the economic areas that are of particular significance for Belarus and for the regime’s income,” German Foreign Minister Heiko Maas said.

“We want to make very, very clear to Lukashenko that there is no going back,” Maas said.

Maas said the 27 EU countries stand united on sanctions “We are really very, very determined not to budge, not just today — nothing about this will change in the coming weeks and months,” he said.

Lithuanian Foreign Minister Gabrielius Landsbergis said EU countries had thought only a month ago that it still might be possible to reason with Lukashenko but that “the mood is different now.”

Landsbergis accused Minsk of “weaponizing” migration flows. He said around 500 people are sheltering in Lithuania, most from Iraq, and that Belarus border guards brought 30 refugees to the border in recent days. He said Lithuania has limited capacity for them and is building a tent camp.

Sviatlana Tsikhanouskaya, the main opposition challenger who fled Belarus after the vote, welcomed the new measures, saying that “the EU and the entire civilized world have set a goal to stop Lukashenko and the escalation of violence.”

“The EU sanctions would raise not only external, but also internal pressure on Lukashenko … and will make it more costly for his main sponsor, the Kremlin, to maintain the Belarusian regime,” she said.

Tsikhanouskaya said the Ryanair incident shows that “Lukashenko’s regime has become a threat not only to citizens of Belarus but also to international security.”