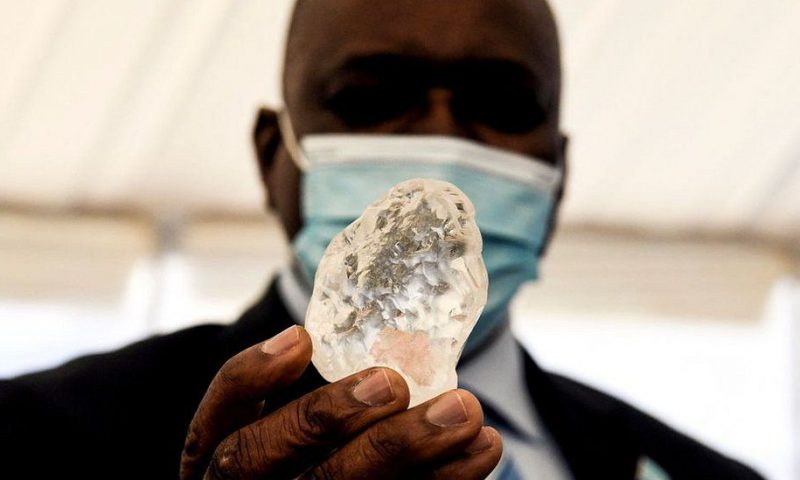 A diamond believed to be the third largest ever found has been put on display in Botswana.

The stone – weighing 1,098 carats – was shown to President Mokgweetsi Masisi, two weeks after the diamond firm, Debswana, unearthed it.

The huge gem is only slightly less heavy than the world’s second-largest diamond which was also found in Botswana in 2015.

“This is the largest diamond to be recovered by Debswana in its history of over 50 years in operation,” said Lynette Armstrong, Debswana Diamond Company’s acting managing director.

“From our preliminary analysis it could be the world’s third largest gem quality stone.”

Debswana is a joint venture between the government and global diamond giant De Beers and up to 80% of the income from sales goes to state coffers through dividends, royalties and taxes.

An estimate of the stone’s potential cost has not yet been released but in 2017, the second-largest diamond ever found, Lesedi La Rona, was sold for $53m (£39.5m).

The biggest diamond ever discovered was the 3,106 carat Cullinan diamond found in South Africa in 1905.

Botswana’s Minerals Minister, Lefoko Moagi, said the latest find could not have come at a better time for Botswana after the pandemic caused diamond sales to slump last year.

The newly discovered stone, which was found at the Jwaneng mine, is yet to be named.

Ms Armstrong said a decision had not yet been taken on whether to sell the “rare and extraordinary stone” though De Beers or through the state-owned Okavango Diamond Company.

Japan to Lift State of Emergency in Tokyo Before Olympics