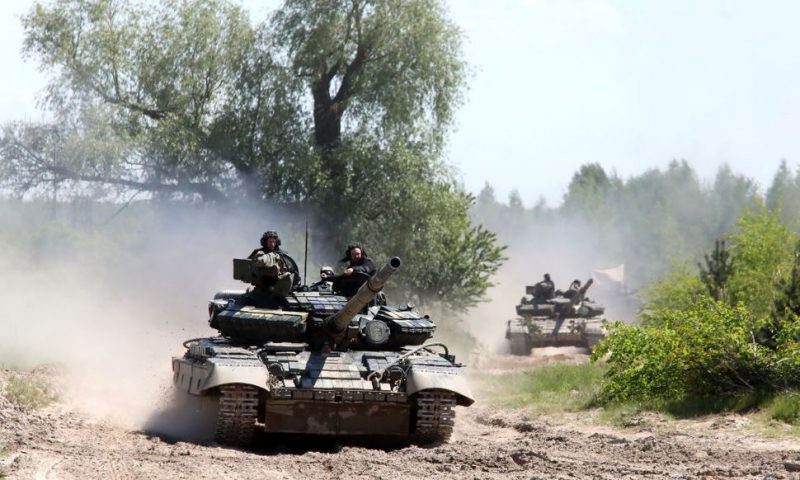 Bold claims from Moscow that an upcoming massive NATO military exercise is a cover for importing weapons into Ukraine mirror Western concerns about Russia’s own behavior.

Ukraine denies it is receiving covert shipments of weapons from NATO under the guise of military exercises, calling Russian claims this week to that effect “manipulative” amid an escalating information war.

Maj. Gen. Igor Konashenkov, a senior official with the Russian Ministry of Defense, told reporters on Wednesday that NATO is planning to deliver sophisticated weapons and ammunition to Ukrainian forces and pro-Kiev militia during the pre-planned Sea Breeze 2021 maritime exercises to begin later this month. He said the shipments would benefit Western-backed troops operating in the ongoing warzone in Ukraine’s far east against pro-Russia separatists, even though the annual exercises take place in the Black Sea.

“In the future, as in previous years, all this will be directed to the Ukrainian troops and nationalist formations stationed near the areas not controlled by Kiev in the Donetsk and Luhansk regions,” Konashenkov claimed, without citing evidence, referring to the two Ukrainian provinces that comprise a region known as the Donbas.

Several American and Ukrainian officials denied knowing of any new weapons transfers beyond existing U.S. financial support and previously announced arms shipments, like the $125 million deal reached in March that would supply new patrol boats to Ukraine among other weaponry.

All of that cooperation is unilateral and does not involve NATO, nor is it connected to upcoming exercises, a Ukrainian diplomat in Washington tells U.S. News on the condition of anonymity. The diplomat cites the congressionally approved Ukraine Security Assistance Initiative run by the Pentagon and the State Department’s Foreign Military Financing program.

“The training exercises, such as the Sea Breeze, have nothing to do with that since their purpose is not to transfer any sort of equipment but to exchange experience and enhance our interoperability,” the Ukrainian diplomat says. “There is only one country that uses military exercises as an excuse to build up its military presence: Russia. We had a clear example of this fact this spring.”

When asked about Russian claims of new weapons shipments in conjunction with the upcoming exercises, the Pentagon confirmed that it will continue to deliver previously announced military equipment – totaling $2 billion since 2014 – in the coming weeks and months but declined to comment on specific timelines.

“We are committed to strengthening our strategic defense partnership with Ukraine, including through robust security assistance support to enable Ukraine to more effectively defend itself against Russian aggression and progress toward NATO interoperability,” Marine Lt. Col. Anton Semelroth, a Defense spokesman, tells U.S. News. “We have always been transparent about the support we provide to Ukraine. This is in stark contrast to Russia, which continues to instigate and fuel the conflict in eastern Ukraine and mount a disinformation campaign designed to falsely blame Ukraine and the West for escalating tensions.”

[ READ: U.S. Helping Ukraine Foil Russian Cyberattacks as Hacking Spikes: Sources ]
The Russian statements follow a familiar pattern of conspiratorial claims about Western intentions, which in part justified its shock deployment of hundreds of thousands of troops to its border with Ukraine in April. The Pentagon at the time blasted Moscow’s refusal to explain what it claimed to be a training exercise at a time NATO was also carrying out multilateral exercises on a massive scale.

“I’m going to continually talk about what we’re doing – it’s called transparency – it’s a wonderful thing,” Pentagon spokesman John Kirby told reporters in early May, when asked about the perceived hypocrisy in the U.S. blasting Russian military exercises while carrying out its own. “And we’re not getting that out of Moscow and we haven’t. So that’s a big difference right there. It’s a defensive exercise and you will be able to hear us talk about it and communicate to you and to the world what we’re doing and why.”

Though Russia ultimately withdrew the majority of those troops, U.S. News reported at that time Ukrainian officials believed some of the temporary deployments had become permanent, resulting in the kind of surreptitious military move Russia blamed on Ukraine this week.