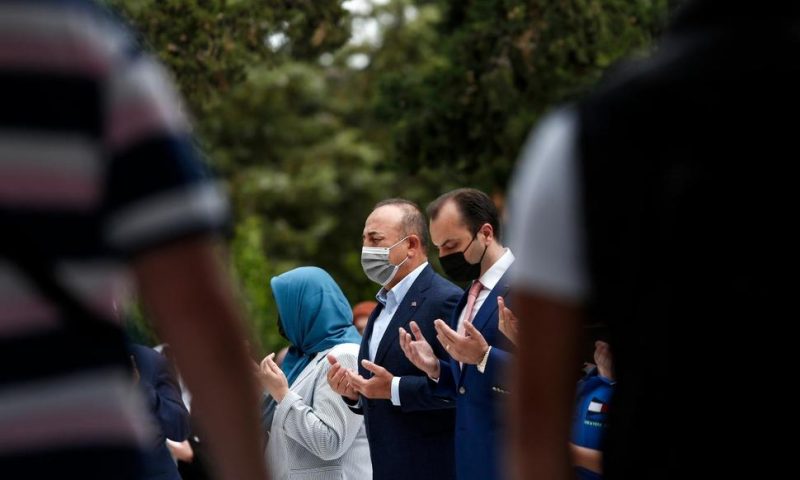 Turkish Foreign Minister Mevlut Cavusoglu has begun his trip to Greece with an unofficial visit to the northeastern province of Thrace, where most of Greece’s Muslim minority resides.

ATHENS, Greece — Turkish Foreign Minister Mevlut Cavusoglu on Sunday began his trip to Greece with an unofficial visit to the northeastern province of Thrace, where most of Greece’s Muslim minority resides.

The official part of Cavusoglu’s trip will take place Monday morning, when he will meet with his Greek counterpart, Nikos Dendias, and Prime Minister Kyriakos Mitsotakis. He and Dendias will also have an informal dinner later Sunday.

Cavusoglu arrived by official plane at the Greek city of Alexandroupolis on Sunday and proceeded to the city of Komotini, where a large part of the Muslim minority resides.

“In #Greece to meet members of Turkish Minority in #WesternThrace and discuss our bilateral relations,” Cavusoglu tweeted.

His mention of a “Turkish minority” is diplomatically sensitive, because Greece recognizes the minority as a religious one, while Turkey refers to it as an ethnic Turkish minority. Greece has tried to promote the ethnic diversity of the minority, highlighting its Roma and Pomak components, in an effort to contain Turkish influence and possible secessionist sentiment.

Cavusoglu met with the two Turkish-approved muftis, of the cities of Komotini and Xanthi, whom Greece doesn’t recognize, having appointed its own. He also visited the grave of Dr. Sadik Ahmet, who was elected in the Greek parliament in 1989 as the head of the openly pro-Turkish Party of Friendship. Equality and Peace. It was Ahmet’s election that prompted Greece to change its electoral law to introduce a national vote threshold of 3% for parties to gain parliamentary seats.

He told media after the school visit that when he meets with Greek officials, he will “bring up the subject of the rights of the Turkish minority in western Thrace.”

Despite Cavusoglu’s statements about the minority, both countries expect the visit to be relatively low-key and avoid the tensions generated in Dendias’ visit to Ankara in April.) The two ministers traded barbs and listed their respective country’s grievances against the other in a rare public exchange of accusations.

Greek officials view the visit as preparing a meeting between Mitsotakis and Turkish President Recep Tayyip Erdogan in mid-June, on the sidelines of a NATO summit. The hope is that this summer will be less tense between the two allied but antagonistic neighbors than the previous one, when clashes over delimitation of maritime zones and search for oil and natural gas dominated.

Greek and Turkish deputy foreign ministers also held talks this past week on lower-level cooperation issues, such as tourism, the environment and improved transport links between the two countries.