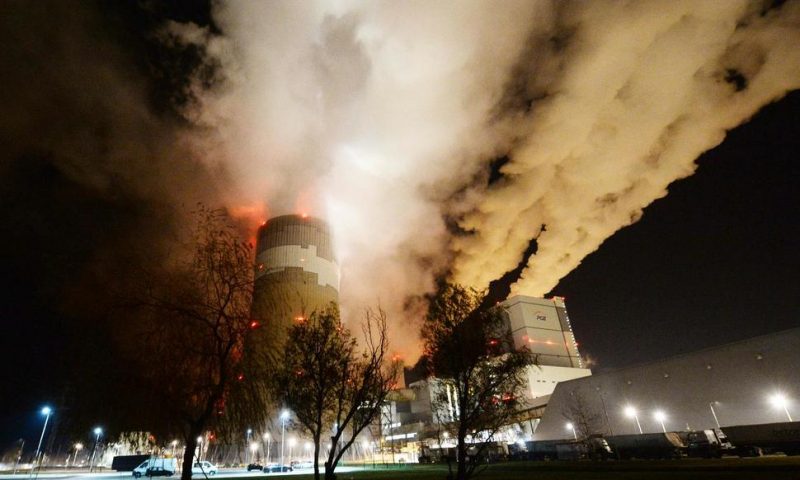 An energy company in Poland says a fire engulfed a conveyer belt at Poland’s largest brown coal mine before it was extinguished.

WARSAW, Poland — A fire engulfed a conveyer belt at Poland’s largest brown coal mine Saturday before it was extinguished, and a linked power plant will have one of its units shut because the fire disrupted coal deliveries.

The midday fire at the Belchatow mine in central Poland covered the area that includes Poland’s largest lignite power plant with huge clouds of black smoke. The fire was the second incident this week forcing the suspension of some of the power plant’s generators.

State energy group PGE, which runs the mine and the neighboring power plant, said later that the fire was out but had disrupted lignite deliveries to one of the plant’s 11 units, which will have to be shut down temporarily. PGE said the shutdown would not cause any power shortages.

PGE said on Twitter the fire was caused by the ignition of brown coal that was being conveyed to the Belchatow plant’s Unit 14 reactor but did not reach it.

Unit 14 was the only one that remained active at the power plant when 10 other units suffered an automated outage Monday that was caused by malfunction at a nearby power switch.

Atop European Union court ordered Poland on Friday to immediately halt operations at a lignite mine in Turow, on the Czech and German border, that also belongs to PGE. Officials in the Czech Republic had complained that the mine used up their groundwater and affected local residents.

Poland’s minister for state assets, Jacek Sasin, declared that Poland did not accept the court’s ruling and would not take any steps that could undermine Poland’s energy security as it phases out black coal.

A tweet by PGE suggested that Poland was not being treated fairly because the EU was not ordering Berlin or Prague to close 14 lignite mines they operate close to Poland’s border.

Coal makes up 65% of Poland’s energy sources, including 17% from lignite, while about 25% of the country’s energy comes from renewable sources. Poland’s heavy reliance on coal is a source of tensions in the 27-nation EU, which is seeking to meet ambitious goals to reduce the bloc’s greenhouse gas emissions.