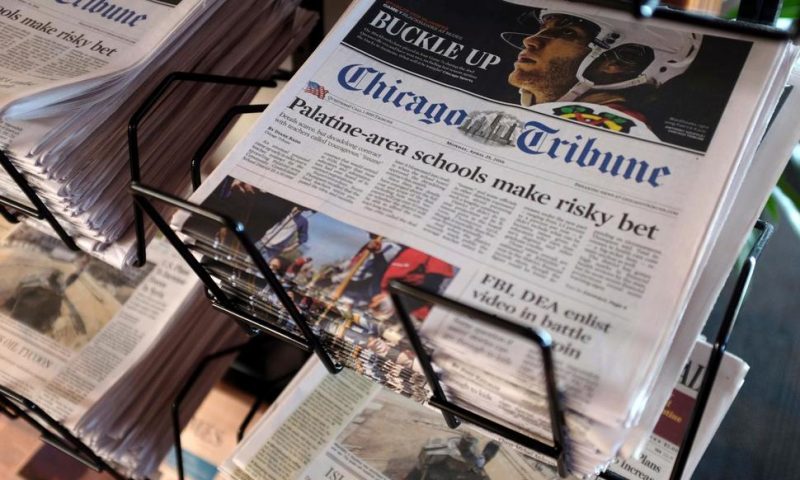 Shareholders of Tribune Publishing, one of the country’s largest newspaper chains, on Friday approved a takeover by hedge fund Alden Global Capital.

Shareholders of Tribune Publishing, one of the country’s largest newspaper chains, will vote Friday on whether to be acquired by a hedge fund that already owns one-third of the company and favors aggressive cost-cutting to boost profits.

The $630 million bid by that hedge fund, Alden Global Capital, has drawn opposition from Tribune journalists at papers including the Chicago Tribune, the Baltimore Sun, the Hartford Courant and the New York Daily News. For more than a year, they have been trying to fend off Alden, whose reputation for squeezing out bigger profit margins is notable even in a shrinking industry characterized by cost cuts and aggressive layoffs.

In an unusual spate of employee activism, the journalists have set up rallies, tried to find local buyers and begged for a rescue in their own newspapers. They have rooted for a higher bid from hotel mogul Stewart Bainum in the belief that it would be better for local journalism and lobbied Patrick Soon-Shiong, the owner of the Los Angeles Times and Tribune’s No. 2 shareholder, to vote no and stop the deal. Soon-Shiong has said he hasn’t made a decision yet. A spokeswoman for the billionaire this week declined an interview request.

Alden owns Digital First Media, one of the country’s largest newspaper chains. Its papers include the Boston Herald, the Denver Post and the San Jose Mercury News. It became Tribune’s largest shareholder in 2019 and has a 32% stake. The union representing Tribune’s journalists says the hedge fund’s cost cuts have already led to shrinking newsrooms and closed offices.

“Alden as top shareholder is an ongoing crisis, but Alden in full control will likely destroy Tribune publications,” wrote Gregory Pratt, head of the Chicago Tribune Guild and a Tribune reporter, in a plea to Soon-Shiong to reject the Alden deal. Representatives for Alden and Tribune did not respond to questions.

Tribune itself is no stranger to cost cuts and shrinking newsrooms. After emerging from bankruptcy in 2012, it split from its TV broadcasting arm in 2014 and since then has bought and sold papers including the Los Angeles Times (sold), the San Diego Union-Tribune (bought and then sold) and the New York Daily News (bought, then hit with layoffs that cut its editorial staff in half ). Its annual revenue has fallen by more than half since 2015, and by the end of 2020 its number of full- and part-time employees stood at 2,865 people, just 40% of its headcount five years earlier.

Financial firms view newspapers primarily as short-term investments, according to a 2020 report by the University of North Carolina’s journalism school. Private equity firms and hedge fund owners prioritize shareholder returns over journalism’s civic mission, it found, leading other newspaper owners to adopt similar practices as print-ad revenue, previously key to the industry’s financial health, collapsed. The result: round after round of layoffs, more than 2,000 papers shut down over 15 years and many surviving papers reduced to shells of their former selves.

The financial firms have played a significant role in consolidating the industry as online competition drew away readers’ attention and ad dollars. Hedge fund Chatham Asset Management bought newspaper chain McClatchy in an auction last year following the company’s bankruptcy, beating a bid from Alden. A newspaper company managed by private equity firm Fortress bought Gannett in 2019 with a high-interest loan from another private equity firm. The newspaper company, which retained the Gannett name and is publicly traded, has since ended the management arrangement with Fortress.

The battle for Tribune’s fate accelerated in December, when Alden offered to buy all of the company. A special committee of Tribune’s board recommends that shareholders accept the deal. Tribune CEO Terry Jimenez, who is on the board, has opposed the bid as too low.

An expected higher bid for the whole company from the hotel mogul Bainum never fully materialized. He has been unable to find a buyer for the Chicago Tribune, a key element in his plan to return the company’s papers to local ownership. Hansjörg Wyss, a billionaire from Wyoming who expressed interest in owning the Chicago Tribune, joined Bainum’s bid, then subsequently dropped out. He did not say why.

Prior to his bid for all of Tribune, Bainum struck a side deal to buy Baltimore Sun Media from Tribune for $65 million via a nonprofit. It’s unclear what happens to the Sun should the Alden bid succeed on Friday. Messages left for Bainum through his hotel company and a family foundation were not returned.

Should the vote fail, Tribune’s future would remain undecided. Alden could make another bid or abandon the deal; meanwhile, Bainum might keep trying to pull together investors to buy Tribune and then split it up among local owners. In the short term, Tribune would go on as it has, said Poynter media analyst Rick Edmonds.