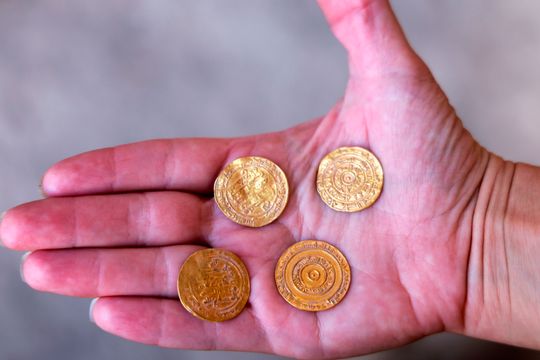 Rapid and sharp decline of bitcoin and other crypto … ‘may have caused cryptocurrency investors to lose faith in cryptocurrencies as a “gold replacement”,’ says Granite Shares’ Klearman

Prices for the metal declined for the session on “weekend profit taking” as well as disappointment over gold’s “inability to break past” the key $1,900 mark, said Chintan Karnani, director of research at Insignia Consultants.

However, a rise in gold exchange-traded fund demand is a “positive sign for the gold price for the week ahead,” he said in a market update.

Gold prices on Thursday settled at their highest in more than four months, extending a streak of daily gains to the longest since July 2020.

“Growing uncertainty surrounding the [Federal Reserve’s] course of action over the coming months and how that will affect inflation and U.S. stock market levels,” have helped to support gold prices, said Jeff Klearman, portfolio manager at GraniteShares, which offers the GraniteShares Gold Trust BAR, +0.05%.

The U.S. central bank has “repeatedly stated that it will keep rates near zero for some time tightening monetary policy, if necessary, by first scaling back its Treasury and mortgage backed securities buyback program,” he told MarketWatch. “Concerns the Fed may need to raise rates sooner than later because of higher-than-expected inflation has unsettled stock markets, increasing investor desire for gold as a haven investment.”

Along those same lines, “the rapid and sharp decline of bitcoin BTCUSD, +10.03% and other cryptocurrencies affected by the same uncertainty plaguing U.S. stock markets, may have caused cryptocurrency investors to lose faith in cryptocurrencies as a ‘gold replacement’” and move directly into gold as a haven investment, Klearman said.

Meanwhile, strength in the U.S. dollar also contributed to gold’s overall gains, he said. The ICE U.S. Dollar Index DXY, +0.25% trades more than 1% lower for the month and down over 3% for the quarter.

For the week, gold futures, based on the most-active contracts, still gained 2.1%, marking its third consecutive weekly advance, while silver added 0.4% from the week ago settlement, according to Dow Jones Market Data.

Gold prices haven’t been above $1,900 since early January.

However, there are some conditions under which it may manage to move solidly above that price, including “continued uncertainty with respect to the Fed’s ability or desire to maintain its aggressively accommodative monetary policy,” said Klearman.

Also, “data confirming inflation is more than transitory, and that the Fed will be forced to act sooner than later, may increase the volatility of U.S. stock markets and cryptocurrencies and support gold prices,” he said.

Copper prices, which were up over 1.5% through Tuesday, dropped over 3% Wednesday “following China’s announcement it will act to prevent ‘unreasonable’ price increases,” said Klearman, who added that China is responsible for over half the world’s consumption of copper.

Earlier this week, Metals Focus estimated that this year, platinum supplies will remain in surplus, but palladium’s deficit is set to climb.