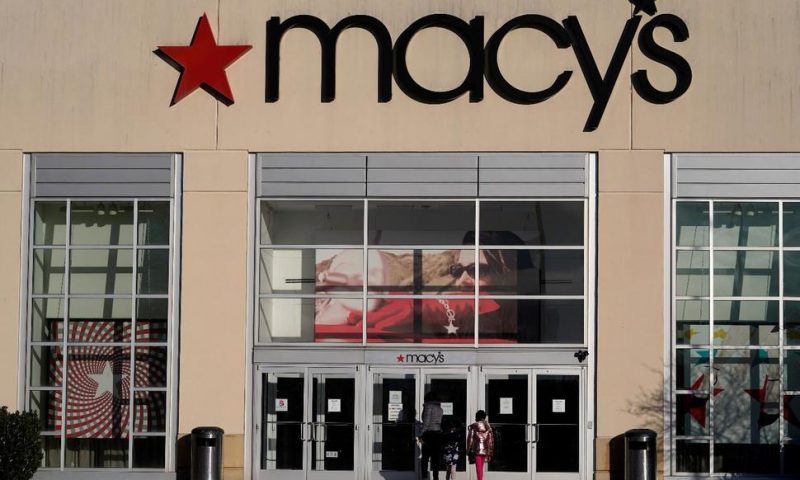 At Walmart, sales of teeth whitener are popping as customers take their masks off.

NEW YORK — At Walmart, sales of teeth whitener are popping as customers take their masks off. So are travel items. Macy’s says that special occasion dressing like prom dresses are on the upswing as well as luggage, men’s tailored clothing, and dressy sandals.

Shoppers, newly vaccinated, are emerging from their homes and going out again, and that, along with government stimulus payments, is helping to boost fiscal first-quarter results for major retailers Walmart and Macy’s. They were among the first to release figures that covered the spring period. Walmart, the nation’s largest retailer, boosted its annual earnings-per-share outlook, while Macy’s surprisingly swung back into the profit column and it boosted its guidance for all of 2021.

“Our optimism is higher than it was at the beginning of the year,” said Walmart CEO Doug McMillon. “In the U.S., customers clearly want to get out and shop.”

“Clearly our customer is ready to get on with life,” Gennette said. “We don’t see this as a short-term pop.”

The overall strong results are a good omen for other major retailers who are slated to report their results in the next few days. During the height of the pandemic-induced lockdowns, Walmart and Home Depot were allowed to stay open, while non-essential retailers like Macy’s were forced to temporarily close, dealing a devastating blow to business. That helped increase the dominance of big box chains.

Tuesday’s results show that for now, Walmart and Home Depot are able to keep sales strong even as the pandemic eases. Walmart served as a pandemic lifeline for shoppers loading up their pantry with groceries and basic household goods, while Home Depot benefited as shut-in shoppers continue to focus on making home improvements. Macy’s solid comeback is encouraging news for other department stores and specialty chains, indicating that customers are ready to buy clothing, a business that was in the dumps.

Of course, retailers face plenty of challenges, particularly shortages of essential workers even as the unemployment rate remains high. Many companies are now having to offer more perks or increase hourly wages. Shoppers could also pull back as costs of groceries go up. And Walmart and other discounters still face increasing competition from online juggernaut Amazon.

At Walmart, sales at stores opened at least a year rose 6%, slowing from the 8.6% increase during the fiscal fourth quarter but better than last year’s 10% spike. The company, based in Bentonville, Arkansas, also said that transactions in its stores were up for the first time in a year. Walmart’s online sales rose 37%, down from 69% during the fourth quarter.

Walmart bumped up spending by $14 billion to speed up its distribution network, and in February said it would raise its average hourly wage to more than $15 per hour, a $1 increase. Amazon and Target have already increased hourly wages to $15 for all workers.

First-quarter net income slipped to $2.73 billion, or 97 cents per share, in the three-month period ended April 30. Adjusted earnings totaled $1.69 per share, topping the average analyst estimate of $1.21 per share, according to FactSet.

Walmart said that it now expects earnings to increase in the high single digits; previously, the company had projected a slight decline in profit for the year.

Analysts believe that sign-ups are slowing for Walmart Plus, a membership program that costs $98 annually, or $12.95 per month. The retailer is hoping it will be a big competitor to Amazon’s juggernaut Prime free shipping program. Walmart Plus gives members same-day delivery on 160,000 items, a fuel discount at certain gas stations and a chance to check out at Walmart stores without having to wait at a register.

However, McMillon told analysts that right now the focus is on the quality of that experience, not the quantity.

Macy’s said that net income hit $103 million after massive losses during the same period last year. On a per-share basis, the New York company’s net income was 32 cents, or 39 cents if one-time charges are removed. Wall Street was looking for losses of about 41 cents per share, according to a survey by Zacks Investment Research.

Sales at stores open at least a year, a critical indicator of a retailer’s health, jumped 31%. In the U.S., those sales rose 29.9%.