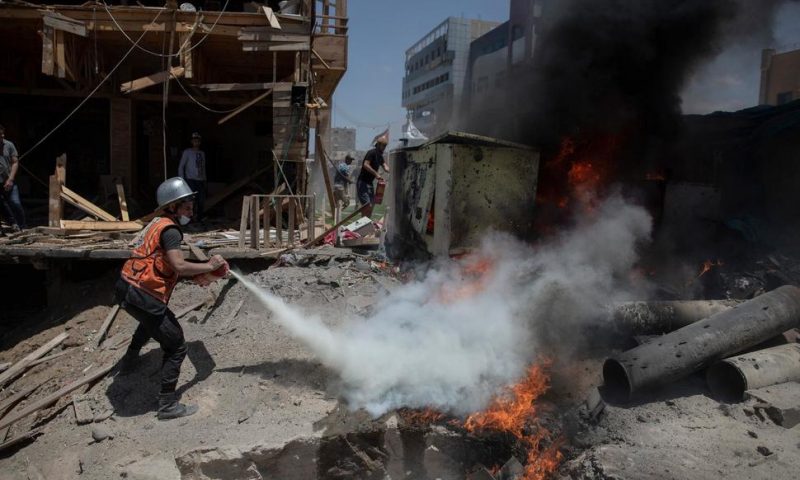 The European Union says that it will redouble its efforts to end the upsurge in violence between the Israeli military and Palestinian militants and will seek progress during a special meeting of its foreign ministers on Tuesday.

BRUSSELS — The European Union will redouble its efforts to end the surge in violence between the Israeli military and Palestinian militants, and seek progress during a special meeting of its foreign ministers on Tuesday.

The EU also called the weekend destruction of a building housing The Associated Press and other major international media “extremely worrying” and said safe working conditions for journalists were essential.

The EU has never had the impact that Washington can wield in the region and no immediate breakthrough was expected from Tuesday’s meeting. Ever since the outbreak of violence last week, the EU has been calling for restraint and condemned attacks that hit civilian populations.

Rome also looked ahead to Tuesday’s meeting. Foreign Minister Luigi Di Maio said Italy had requested to discuss the Mideast violence and said “the violence and attacks between Israel and Palestine must stop.” In a Facebook post, he added that “the EU with its 27 member states must take a clear and unified position and work to press the parties to sit together again at the negotiation table.”

Because EU policy toward the region requires unanimity among the 27 EU member nations, its actions and statements haven’t had the impact that could be expected from a bloc of 450 million people that has large trade interests in the region.

EU foreign policy chief Josep Borrell and European Council President Charles Michel both called over the past days to call for an end to the escalation in violence and ensure that civilians are protected.

Tuesday’s meeting is to seek “how best that EU can contribute to diffusing the tensions, stop the escalation and stop the ongoing violence,” EU spokesman Peter Stano said.

Pro-Palestinian critics of EU policy insist the bloc has been far too lenient when it comes to imposing sanctions on Jerusalem.

The fighting broke out last week, when the Hamas militant group fired long-range rockets at Jerusalem after weeks of clashes in the city between Palestinian protesters and Israeli police. The protests were focused on the heavy-handed policing of a flashpoint sacred site during the Muslim holy month of Ramadan and the threatened eviction of dozens of Palestinian families by Jewish settlers.

Since then, the Israeli military has launched hundreds of airstrikes that it says are targeting Hamas’ militant infrastructure. Palestinian militants in Gaza have fired more than 3,100 rockets into Israel.

Over the weekend, Israel destroyed a building housing The Associated Press and other media, and claimed that Hamas used the building for a military intelligence office. The AP has called on Israel to provide evidence.

“The destruction of media offices in Gaza is extremely worrying and the safety and security of journalists and all their colleagues, the press people, is essential,” Stano said. “Independent reporting, especially in situations of conflict and especially from areas of conflict, is indispensable.”