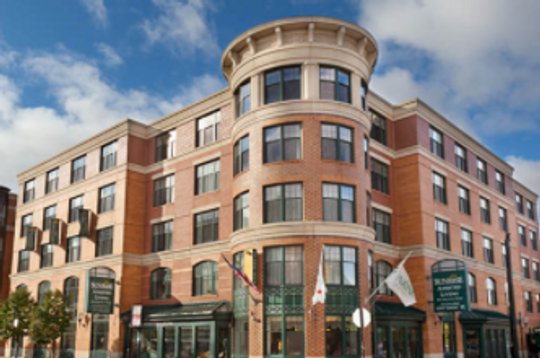 The stock VTR, +2.78% bounced 2.6% in afternoon trading, after dropping 5.0% over the past two days to close Wednesday at a three-month low. The gain was also part of a broad REIT-sector rally, as SPDR Real Estate Select Sector exchange-traded fund XLRE, +1.27% climbed 1.7% with all 29 of its equity components gaining ground.

KeyBanc’s Sadler double upgraded Ventas to overweight, after being at underweight for at least the past three years. He lifted his stock price target to $60, which is 12% above current levels, from $49.

“The positive inflection in seniors housing occupancy that began in mid-March and continued into April appears poised to continue for the foreseeable future, as move-ins are normalizing toward pre-pandemic levels and move-outs remain subdued by the lower in-place occupancy,” Sadler wrote in a note to clients.

The upgrade come nearly a week after Ventas reported that it swung to a surprise first-quarter net loss, but positive adjusted funds from operations that beat expectations, according to FactSet. Total revenue declined 10.1% but also beat forecast, citing an “outperformance” in its Senior Housing Operating Portfolio (SHOP) and the “reliable” performance by its Office and Triple-Net (NNN) businesses.

SHOP occupancy improved by 190 basis points (1.9 percentage points) from the pandemic lows in mid-March through the end of April, and as all of the company’s are now open to new move-ins.

“Let me start by saying that we believe the macro environment and the Ventas outlook have turned an important corner and that the worst of the pandemic is behind us,” said Chief Executive Debra Cafaro, according to a FactSet transcript of the post-earnings conference call with analysts.

She pointed out that this past March and April were the first two-consecutive months that SHOP move-ins exceeded both pre-pandemic move-in levels and move-outs since the start of the pandemic.

“The combination of growing demographic demand and constrained supply creates a favorable backdrop for senior housing recovery, which represents an incredibly significant value creation opportunity for our shareholders,” Cafaro said.

Helping boost confidence in senior housing, after the COVID-19 pandemic wreaked havoc on the sector, is that 84% of Americans 65 years and older have been received at least one dose of COVID-19 vaccines, and 72% of that population have been fully vaccinated, according to data provided by the Centers for Disease Control and Prevention (CDC).

And as Ventas CEO Cafaro said last week, the number of confirmed new cases of COVID-19 among its SHOP residents has fallen “to literally a single person a day” out of a resident population of 40,000.

Despite just new move-ins, KeyBanc’s Sadler said the prospect of “an increasing number of health care procedures among seniors” and the normalization of other traditional demand drivers “could further accelerate move-in activity as pandemic conditions further subside.”