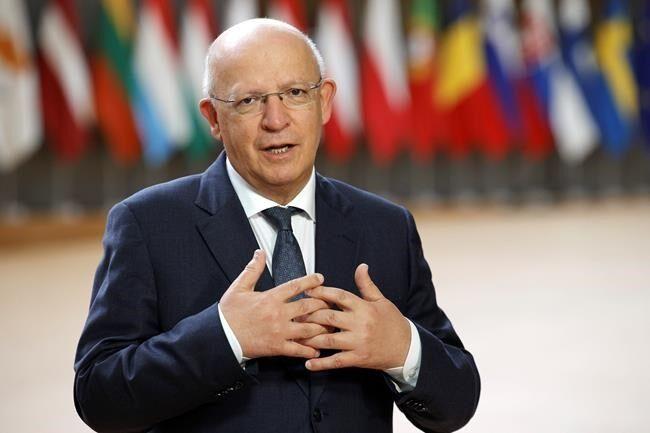 EU talks up Afghan support as US leaves, security declines

With the departure of foreign troops just a few months away, European governments are still trying to work out what kind of diplomatic presence they will keep in Afghanistan and who will provide security for them. They are particularly reluctant to be perceived as abandoning the country.

Just hours after the Taliban announced a cease-fire for later this week, a bus in southern Zabul province struck a roadside mine on Monday killing 11 people. At least 24 others on the bus were injured, the Interior Ministry said.

On Saturday, a bomb attack on a girls’ school killed up to 60 people, most of them students aged 11-15. The death toll from the three explosions there continues to climb.

“After the terrible attacks of recent days, it is all the more important for the EU to make very clear that Afghanistan and the Afghan government can continue to count on Europe’s support,” German Foreign Minister Heiko Maas told reporters in Brussels.

“We will continue to make available sufficient funding for civilian reconstruction, and we will do everything we can so that the ongoing peace negotiations reach a conclusion,” Maas said. Peace talks, though, between the divided Afghan government and the Taliban appear to be going nowhere.

The remaining 2,500 to 3,500 American troops officially began leaving Afghanistan on May 1. They are expected to be out by Sept. 11 at the latest — a deadline set by President Joe Biden. European troops depend on U.S. forces for transport and logistics help and will leave with the Americans.

Germany’s defence ministry has suggested that a July 4 withdrawal might be on the cards.

The U.S. has openly also warned of battlefield gains for the Taliban and officials in Washington say Afghan government forces face an uncertain future against the insurgents as the withdrawal accelerates in the coming weeks.

This is all raises deep security concerns for the Europeans which weigh heavily as they debate how to help ordinary Afghan civilians, including many who have helped international forces, agencies and NGOs during almost 20 years of conflict.

“The decision has been taken and what we have to do is to face the situation that is going to be created,” EU foreign policy chief Josep Borrell said last Thursday. “The violence in Afghanistan is increasing, and it’s clear that once the U.S. will withdraw, the European Union troops will not be able to stay.”

“We better face the future and to try to take positive decisions in order to face reality,” Borrell said.

Part of that reality could be a return of the Taliban as the dominant force.

No matter who is in control in the future, Maas said Monday, the EU “will always point out to those in charge in Afghanistan that the aid we make available is tied to the things that have been achieved in the past 20 years — regarding the building of the state, regarding women’s rights, regarding education — not being sacrificed. That is the precondition.”

China to draw ‘separation line’ on peak of Mount Everest