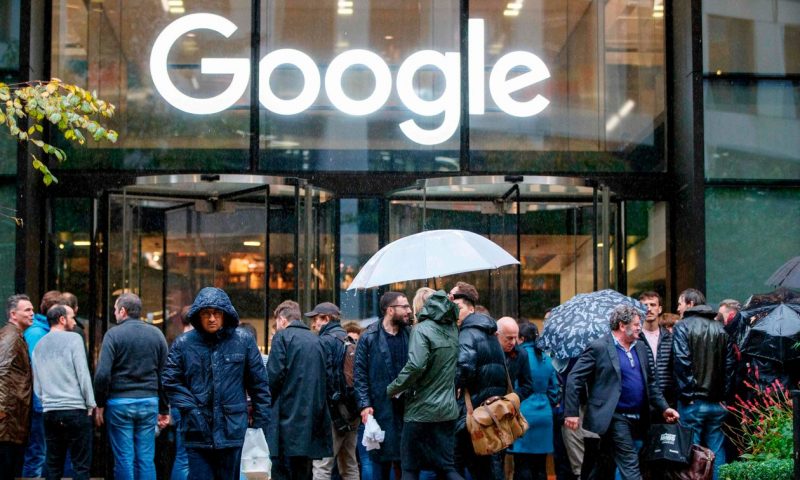 When Google parent Alphabet Inc. reports first-quarter earnings on Tuesday, the bottom-line should be stout with advertising sales.

The same can’t be said for its prospects on the regulatory front.

Alphabet GOOGL, +2.10% GOOG, +2.09% is expected to show revenue growth of roughly 25% from last year, when the COVID-19 pandemic caused some companies to immediately cut off their advertising budgets to preserve cash. The company’s sales are largely dependent on sales of advertisements on its search engine, YouTube and other websites, which have made it dominant in the online-ads industry.

That dominance has led to scrutiny, however. On Wednesday, Wilson White, senior director of public policy and government relations, became the latest Google executive to be roughed up by a congressional committee. Members of the Senate Judiciary’s Subcommittee on Competition Policy, Antitrust, and Consumer Rights, as well as witnesses, roughed up Wilson and Apple’s chief compliance officer over their company’s respective app stores.

White deemed the call “an honest question” and didn’t consider it a threat. “We would never threaten our partners,” he said, because they are the lifeblood of the Google Play app store.

Still, the accusation by a developer and scolding from a politician manifested what has become a narrative over the past two years for Google: That it has engaged in anticompetitive business practices with its search business, leading to multiple lawsuits from the Justice Department and states, as well as investigations overseas.

In its proxy statement filed late Friday, Alphabet’s board recommended against a stockholder proposal for the board to report “how it oversees risks related to anticompetitive practices.”

“The global regulatory landscape is ever-evolving, complex, and multifaceted,” according to the proxy. “We have clear oversight responsibilities and robust
structures in place to evaluate and manage competition-related risks on an ongoing basis that we publicly disclose.”

It hardly seems to matter, however, with advertising revenue on the rise for market leaders Google, Facebook Inc. FB, +1.55%, Amazon.com Inc. AMZN, +0.96% and others. Even Apple Inc. AAPL, +1.80% — which is planning a change to its operating system seen as detrimental to ad-based revenue models — expects to add a second advertising slot in its App Store search page’s “suggested” section, according to a Financial Times report Thursday.

Earnings: Alphabet on average is expected to post earnings of $15.66 a share, up from $13.48 a share expected at the beginning of the quarter, based on 37 analysts surveyed by FactSet. Alphabet reported earnings of $9.87 a share in the same quarter a year ago. Estimize, a software platform that uses crowdsourcing from hedge-fund executives, brokerages, buy-side analysts and others, calls for earnings of $15.59 a share.

Revenue: Wall Street expects revenue of $51.4 billion from Facebook, according to 30 analysts polled by FactSet. That’s up from the $48.1 billion forecast at the beginning of the quarter and $41.2 billion reported a year ago. Traffic-acquisition costs are estimated at $9.1 billion, which would give Alphabet revenue of $43.1 billion when extracted; by that standard, Alphabet reported sales of $33.7 billion a year ago. Estimize expects revenue of $42.1 billion after removing traffic-acquisition costs.

Stock movement: Alphabet stock has declined following three of the past seven earnings reports. The shares are up 31% in 2021, and 80% over the past 12 months, through Wednesday’s close of market. By comparison, the broader S&P 500 index SPX, +1.09% has gained 11% and 47%, respectively.

Google’s good fortunes reflect a rebounding ad market and spikes in search spending, Cowen analyst John Blackledge concluded in an April 14 note that hiked the company’s price target to $2,600 from $2,400, while maintaining an outperform rating.

Blackledge predicts Google search revenue will jump 45%, year-over-year, up from a 28% increase in the previous quarter.

J.P. Morgan analyst Doug Anmuth rates Google as his top pick, and the next likely tech company to top $2 trillion in market value. (As of Friday, Alphabet was worth $1.5 trillion.)

“We remain positive on improving top & bottom line trajectory and
potential for bigger capital returns,” Anmuth said in an April 19 note. “Google Search remains a sizable driver of value at 58% of our [sum of the parts evaluation], or more than $1T in value, with Google’s next growth drivers YouTube & Cloud representing 22% & 14%.”

How Wyoming became the promised land for bitcoin investors