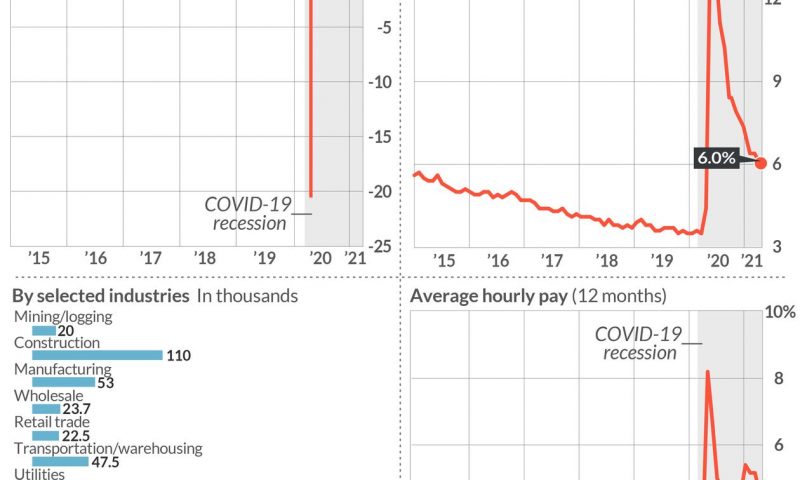 The numbers: Restaurants and other businesses hired the most workers in March in seven months as the U.S. added 916,000 new jobs, signaling the economy is primed for a period of rapid expansion again.

Employment accelerated after the weather warmed and a decline in coronavirus cases allowed states to relax business restrictions. Rising vaccination rates gave Americans more freedom to venture out to eat, attend a game, travel or engage in other activities they would have avoided at the height of the pandemic.

Hiring in February and January was also much stronger than previously reported.

Economists predict even faster hiring in the months ahead if most Americans get vaccinated and the coronavirus pandemic fades away, though it will take a while to know for sure. Covid-19 cases in the U.S. have actually risen slightly in the past few weeks for the first time in several months.

The official unemployment rate, meanwhile, slipped to 6% from 6.2%, the Labor Department said Friday. Yet the official rate doesn’t capture nearly 4 million people who lost their jobs last year and left the labor force.

Economists peg the true unemployment rate at above 9%.

What happened: Companies in leisure and hospitality hired the most people in March. They added 280,000 jobs to bring total employment gains in the past two months to 664,000.

Restaurants were at the forefront, creating 176,000 new jobs. More Americans are going out to eat and the numbers are expected to grow as most of the country gets vaccinated and spring arrives. People are eager to go out after being stuck at home for the past year.

Employment in construction bounced back after a decline in February tied to poor weather. Builders hired 110,000 people, the largest increase in nine months.

Soaring home sales and a revival in commercial construction are fueling the biggest industry boom in more than a decade. The biggest problem is finding enough skilled workers.

Manufacturers, for their part, added 53,000 workers. The industrial side of the economy is also growly rapidly again and leading the U.S. recovery. Demand in many cases is so strong that companies can’t find enough raw materials, parts or other supplies to keep up.

Government employment also surged in March, mostly in state and local education. Some 136,000 jobs were added.

Hiring rose in every other major part of the economy except information services, a catchall category that includes media and public relations.

The number of jobs created in the first two months of the year was also revised up by a combined 156,000

Nearly 350,000 people joined the labor force in March in another good sign, but the total is still about 3.9 million below pre-pandemic levels. Those missing workers are no longer counted in the official unemployment rate, helping to explain why it’s relatively low now.

A better measure of unemployment is the government’s so-called U6 rate that includes people who’ve recently stopped looking for work as well as those who can only find part-time jobs.

Big picture: The skies have cleared for the U.S. economy after a record surge in coronavirus cases clouded the outlook over the winter. Growth is likely to speed up through the spring and early summer if the vaccines do their job and keep the coronavirus pandemic at bay.

Yet even in a best-case scenario, the U.S. is unlikely to quickly recoup all of the 8.4 million jobs that are still missing one year after the onset of the pandemic. The destruction caused by the pandemic, including lost jobs and shuttered businesses, is likely to linger for a few years.

What they are saying? “Job growth is now accelerating across the nation, helped by massive fiscal stimulus and a now speedy vaccination program,” said senior economist Sal Guatieri of BMO Capital Markets.

“While we still have a long way to go to repair the damage that was done to the economy last year, we’re making good progress,” said Chris Zaccarelli, chief investment officer at Independent Advisor Alliance

Market reaction: The Dow Jones Industrial Average DJIA, +0.52% and S&P 500 SPX, +1.18% closed higher on Thursday to finish out a shortened week. Markets are closed on Friday due to the Good Friday holiday.