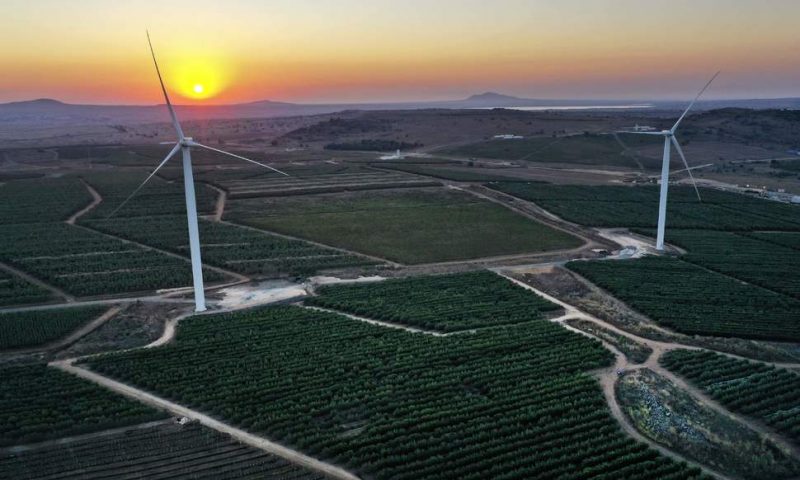 The massive wind turbines are the latest example of renewable energy plans running into the rights of local and indigenous communities.

JERUSALEM – EMIL MASOUD is worried that huge wind turbines will soon ruin the landscape his family has farmed for generations in the Israeli-controlled Golan Heights, on the border with Syria. The turbines will dwarf the cherry and apple trees, create noise, and require new roads through the picturesque farmland, Masoud says of a project under development mainly by the Energix Group, an Israeli renewable energy company with projects globally.

“We are talking about megastructures that are not suitable for this land,” says Masoud, a graduate of Damascus University, who also runs a nearby flower and housewares shop. “It will affect me badly and I will not get any benefits from it.”

Masoud is one of dozens of local residents, along with three nonprofit groups, that oppose the project, which calls for building up to 50 wind turbines, each at a height of more than six stories, to create renewable energy as part of Israel’s long-term plan to reduce reliance on fossil fuels. Meanwhile, a handful of families in the area, which have agreed to let the turbines be built on their private land, will benefit economically from the project.

With work underway since January, the project has divided the community, and brought to the surface tensions that remain between some of the local residents and Israel’s control over the area, which it conquered from Syria in the 1967 Six-Day War.

It is also part of a growing global trend of renewable energy projects altering natural landscapes and having an adverse effect on local or indigenous communities, even though the goals of such projects are to improve the environment.

“It is a very common situation now to have these projects, which are supposed to make a green future, but they prove far more complicated,” says Alexander Dunlap, a research fellow at the Centre for Development and the Environment at the University of Oslo, who has studied how wind and solar energy projects around the world affect local communities. Infrastructure, such as large wind turbines or large fields of solar panels, dramatically transforms rural landscapes, and often require additional access roads and result in some amount of increased traffic for construction and maintenance. Some studies have also shown that the slight but constant noise of wind turbines is associated with health issues, such as increased headaches and difficulty sleeping, although no direct link has been found.

“There is also the psychological effect on the people who live around these areas,” Dunlap says. “It’s like you are bringing in huge robots that dominate the landscape.”

A study released last year by the International Work Group for Indigenous Affairs – an international human rights group based in Denmark – noted how two renewable energy projects in Kenya have stirred concerns over the loss of local indigenous people’s rights, as government agencies and private corporations unilaterally seize lands. In the United States, President Joe Biden has prioritized increasing renewable energy, but, as the Arizona Republic noted, increasing the scale of solar and wind projects has raised worries by local Native Americans over preserving their cultural, religious and burial lands.

New projects also often cause tension in communities, because some members may want them, while neighbors are opposed. And, in cases where companies place infrastructure on private land, those nearby are often resentful, he says.

This is what has happened in the Golan, where Energix is cooperating with some community members to use their private land.

“This has created tensions between neighbors and families in our community,” says Masoud, who, like most in the area belong to the small Arabic-speaking Druze community, which practices a semi-secretive monotheistic religion that developed as an offshoot of Islam in the 11th century, and also identifies as Syrian. “It is dividing us, even as we are a small minority.”

The Israeli government has approved the project and says it will help the country meet its goal of obtaining 10% of its power from renewable sources. Energix has said the project will create local jobs.

But there are also political undertones to the dispute, with workers at the local nonprofit group Al Marsad, who helped organize a petition against the project, saying it violates international law because many countries and the United Nations consider Israel to be illegally occupying the Golan. New U.S. Secretary of State Antony Blinken said last week that the territory was important for Israel’s security, but that it’s legal status could change in the future if the situation in Syria changes, backing away from former President Donald Trump’s full 2019 endorsement of Israel’s annexation of the Golan.

Energix has responded with a lawsuit against Al Marsad, accusing the group of engaging in activities that violate the law against participating in the Boycott Divestment and Sanctions movement, a movement started by Palestinian civil society to boycott goods from territories occupied by Israel – a charge the group denies. Al Marsad has refused an offer to settle the case and says it will fight it in court.

Most of the Golan’s Arabic-speaking residents still consider themselves Syrian and all but about 1,500 have declined to take on Israeli citizenship.

“They are keeping their Syrian identity as a way to assert who they are,” says Shlomo Brom, a retired brigadier general in the Israel Defense Forces and fellow at the Institute for National Security Studies at Tel Aviv University. “Other than that, they are not doing a lot,” to actively oppose Israel, he says. “Israel doesn’t perceive them as enemies, and invests somewhat in their cities and infrastructure.”

Masoud insists the opposition to the project is not political.

“Even if it were Syrians or Jordanians doing the project, we would oppose it,” he says. “Even though wind turbines are good when we talk about producing energy and fighting global warming, it’s just not something suitable for this land.”