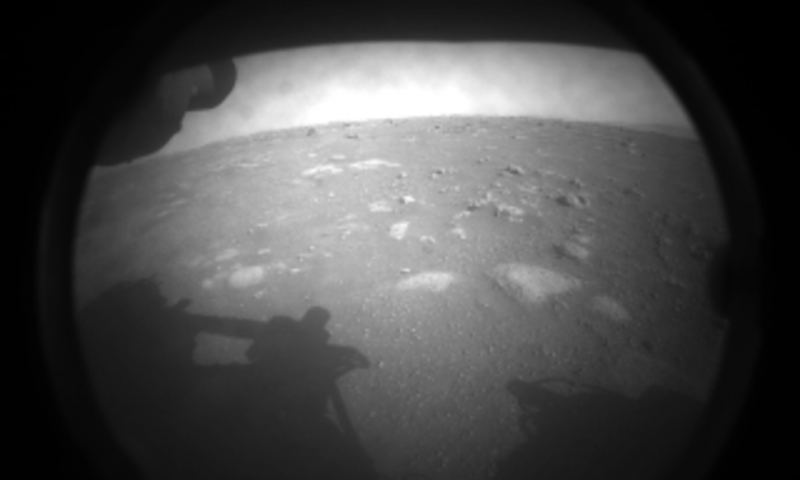 The six-wheeled rover named Perseverance will search the red planet for signs of ancient life.

AFTER A SEVEN-MONTH, 300-million-mile journey, a NASA rover on Thursday successfully landed on the red planet, where it will search for signs of ancient life.

The rover, called Perseverance, had to endure “seven minutes of terror” to make it to the Martian surface. The saying refers to the time it takes to travel through the thin atmosphere of Mars, which the spacecraft had to do autonomously due to the 11-minute lag time in communications with Earth.

During that time, the spacecraft had to slow itself from 12,000 miles per hour to about 2 miles per hour using thrusters and a parachute. From there, the six-wheeled rover was lowered to the Mars surface using cables. Its landing spot – the Jezero crater – was selected by scientists who believe the area was once a flooded river delta.

Though the rover’s harrowing commute is over, the mission ahead of it is not a walk in the park. Facing cliffs and craters, Perseverance will pack soil samples into tubes that will sit on the surface of Mars until a collection mission can fetch them.

Cameras and microphones attached to Perseverance will give researchers the opportunity to see and hear what goes on at the red planet. NASA will also attempt to fly a small helicopter that caught a ride on the rover. Called Ingenuity, it would be the first human-made vehicle to fly on another planet.

The mission could help pave the way for humans to go to the red planet. NASA aims to perform a technology demonstration to turn carbon dioxide in the atmosphere of Mars into oxygen in the hopes that it could provide life support for humans traveling to the planet in the future.

Perseverance is NASA’s ninth robot to land on Mars and the third spacecraft to arrive at the planet this month following others from the United Arab Emirates and China.