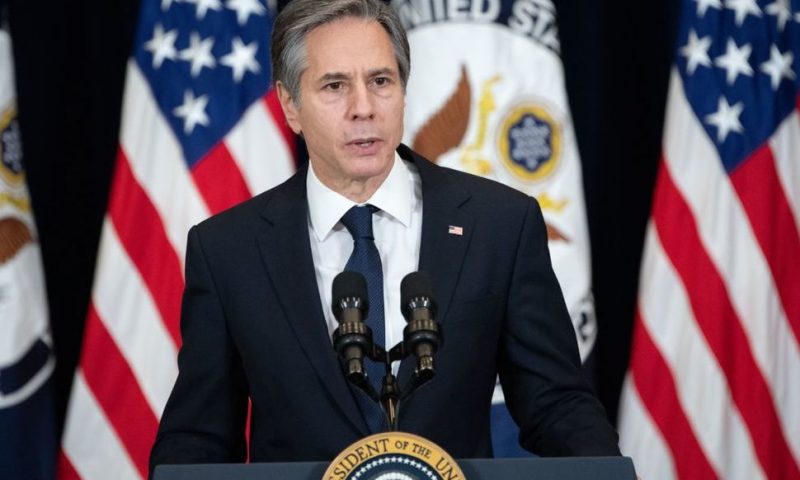 The announcement regarding Tehran’s nuclear program offers the first clues on how President Joe Biden will address one of the thorniest foreign policy problems he faces.

THE WHITE HOUSE LATE Thursday said it is ready to meet with Iran, along with other signatories to the 2015 deal governing its nuclear program, opening the door to negotiations in one of the thorniest foreign issues facing President Joe Biden.

“The United States would accept an invitation from the European Union High Representative to attend a meeting of the P5+1 and Iran to discuss a diplomatic way forward on Iran’s nuclear program,” State Department spokesman Ned Price said in a statement Thursday afternoon, referencing the five permanent members of the U.N. Security Council along with Germany – the primary signatories to the deal brokered by the Obama administration that President Donald Trump unilaterally tore up months into his administration.

The announcement came hours after Secretary of State Antony Blinken met virtually with his counterparts from France, Germany and the U.K. The four chief diplomats issued a joint statement immediately afterward in which they commended the 2015 deal, known formally as the Joint Comprehensive Plan of Action or JCPOA, as “a key achievement of multilateral diplomacy” and pledged their interest in returning to some form of talks with Iran.

They called on Iran to cease its provocative nuclear activities, including higher uranium enrichment levels that they said “have no credible civil justification” but rather represent “a key step in the development of a nuclear weapon.”

Thursday’s announcements shed light on how the Biden administration plans to move forward in dealing with Iran, following the Trump administration’s “maximum pressure” campaign that saw unyielding diplomatic, economic and at times military punishments against Tehran. It remains unclear whether the White House will simply attempt to return to the terms of the original deal – which Iran has pressed for, in return for sanctions relief – rather than seek negotiations to determine a new agreement.

The joint statement earlier on Thursday stated, “Secretary Blinken reiterated that, as President Biden has said, if Iran comes back into strict compliance with its commitments under the JCPOA, the United States will do the same and is prepared to engage in discussions with Iran toward that end.”

Immediate relations between Tehran and Washington stalled in the first days of the Biden administration over a disagreement about who should act first – whether the U.S. should begin lifting sanctions or Iran should first demonstrate its intent to back away from pursuit of a nuclear weapon and other provocative military actions.

Further complicating matters was the attack on a U.S. base near Irbil, Iraq, on Monday that U.S. and Kurdish officials privately attribute to Iran. No U.S. official had overtly blamed Tehran for the attack as of Thursday afternoon – a break from prior years that saw almost immediate attribution of similar strikes.

When asked about the apparent delay in blaming Iran for the provocative attack, Pentagon spokesman John Kirby said, “I would not read into the manner in which we’re going about this as some sort of policy derivative.”

The Trump administration walked away from the deal because it argued it didn’t also govern Iran’s other malign activity, such as its support for terrorist groups and proxy militias in ongoing conflicts in Iraq, Yemen and elsewhere. The original deal was never intended to address these actions.

Trump drew widespread international condemnation last year for attempting to use provisions within the deal to punish Iran for noncompliance, even though the U.S. had withdrawn from it.

Officials said immediately after Thursday’s announcement that the Biden administration had rescinded Trump’s requests for sanctions at the U.N. and that it had eased travel restrictions on Iranian diplomats to its headquarters in New York that Trump had imposed, the Associated Press reported.

Thursday’s announcement was met with some criticism almost immediately from Republicans in Congress.

“It is concerning the Biden Administration is already making concessions in an apparent attempt to re-enter the flawed Iran deal,” Rep Mike McCaul of Texas, the top Republican on the House Foreign Affairs Committee, said in a statement. “The Trump Administration created leverage for President Biden on Iran – we should not squander that progress. We need to secure a better deal that keeps the American people safe from the full range of Iran’s malign threats. The Biden Administration must prioritize bipartisanship and stick to their assurance not to re-enter the deal until Iran comes back into full compliance with the JCPOA.”

Walmart Sales Still Surging, but a Chill May Be on the Way