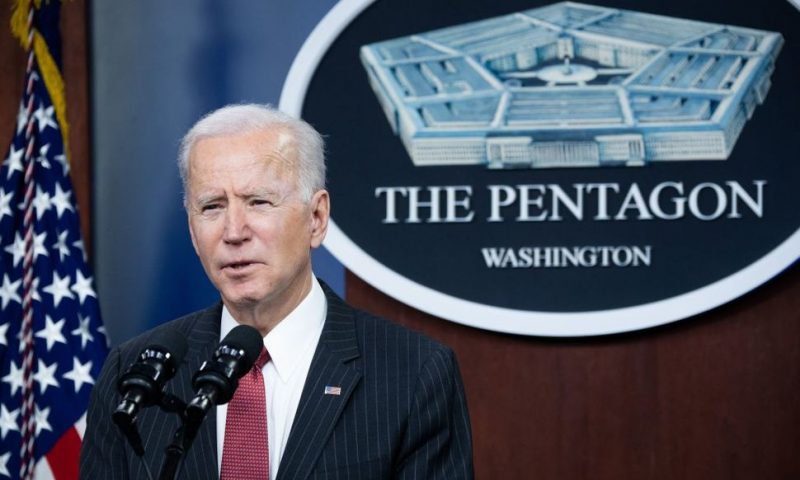 The assessment of the U.S. approach to Beijing comes as the Biden administration seeks to distance itself from the policies of President Donald Trump.

PRESIDENT JOE BIDEN IN remarks at the Defense Department on Wednesday announced a new task force to study all military policy toward China, which he says will ensure that America will “meet the China challenge” and “win the competition of the future.”

The new initiative, to be led by Ely Ratner, a longtime Biden staffer and former executive at the Center for a New American Security think tank, and composed of military and civilian members, will have four months to study the current Pentagon posture toward Beijing and provide Defense Secretary Lloyd Austin with new recommendations.

The Pentagon announced Wednesday that it does not expect a final report from the task force, to be composed of roughly a dozen uniformed and civilian defense staffers from across the department.

The announcement, which Biden made during his second trip to a federal department since becoming president, serves as the latest attempt by his administration to establish a distinctive plan for its foreign policy following the broadly ad hoc and seemingly disjointed approach of his predecessor Donald Trump.

However, it’s unclear if and how Biden will break from Trump in his approach to China, perhaps the most significant foreign problem facing the U.S. president. Many analysts believe Biden would benefit from continuing many of the opportunities Trump created to mount pressure on Beijing.

And reviews into U.S. policy toward China are already underway, including one led by the House Foreign Affairs Committee. It’s top Republican, Rep. Mike McCaul of Texas, said in response to reports of Biden’s announcement that “House Republicans already did a lot of the heavy lifting with the China Task Force Report we released last year,” citing the more than 400 recommendations it included, two-thirds of which were bipartisan, he said.

Regardless of the outcome with China, Biden’s remarks on Wednesday addressed to the military and Defense Department workforce were clearly designed to represent a break from Trump.

In an obvious reference to reports Trump at least once referred to troops who had died while in the line of duty as “suckers” and “losers,” Biden said Wednesday, “I will never dishonor you, I will never disrespect you. I will never policitize the work you do.” He also appeared to be referencing a broad sense that the Trump presidency attempted to exploit the unique trust the American people place in the military as an institution.

He cited climate change second in a list of the most pressing dangers facing the U.S. – Trump had stripped any mention of climate change from the Defense Department’s principal strategy document in the first years of his presidency.

Biden also confirmed that Saudi Arabia had released jailed women’s rights activist Loujain al-Hathloul earlier on Wednesday – a clear break from relations between Washington and Riyadh during the last four years that saw little, if any, discussion of the kingdom’s human rights record.

Austin also not so subtly hinted at what he considered the differences between Trump and Biden’s presidencies amid criticisms of an over militarization of America’s foreign policy in recent years. The former four-star general, known among American ambassadors for his close collaboration with diplomats during tours in Iraq, said the new administration operates under the belief that for Biden, “his first call should be to our diplomats, with us in support.”