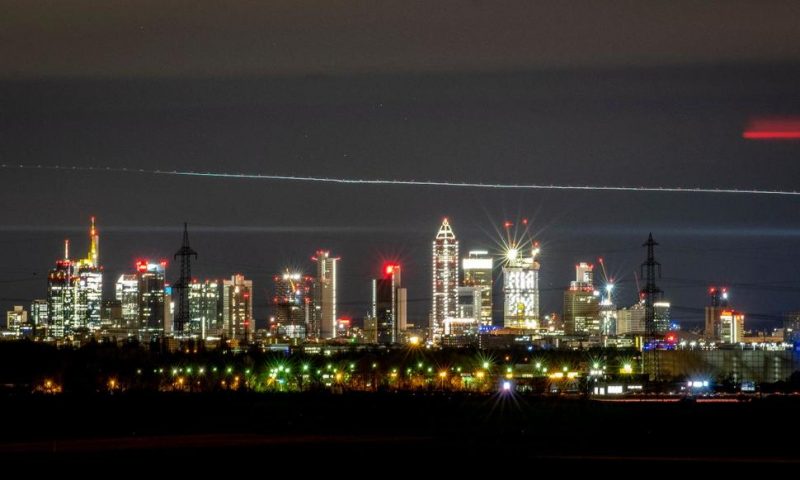 The European Central Bank has left its bond-purchase stimulus program unchanged as the 19-country eurozone endures a winter economic slowdown due to the pandemic.

FRANKFURT, Germany — With more than a trillion euros in stimulus still in the pipeline to the economy, the European Central Bank left its key bond-purchase program unchanged Thursday as the 19-country eurozone endures a winter economic slowdown due to the pandemic.

ECB President Christine Lagarde told a news conference that the economy likely contracted in the last three months of 2020 and the outlook going forward faces risks.

Coronavirus infections and deaths have risen during the winter, leading to new restrictions on businesses. Germany has extended its partial lockdown until Feb. 14, France has imposed a 6 p.m. curfew, and Portugal has hit multiple records in case numbers.

Lagarde said that while the start of vaccinations against the coronavirus was “an important milestone,” the outbreak continued to pose “serious risk to the eurozone and global economies.”

“We had anticipated the continuation and the lockdown measures that are currently in place… and that leads us to conclude that our own forecast for 2021 is still broadly valid at this time,” she said, while cautioning that short-term risk was “tilted to the downside, no question about it.”

She said that “an ample monetary stimulus remains essential” and that if things turn out worse than expected “all instruments can be adjusted and nothing is off the table” in terms of stimulus.

The economy is being propped up by massive support from the ECB, national governments, and the EU. The ECB’s decision not to adjust its key programs was largely expected because it added a major dose of stimulus only last month, at its Dec. 10 meeting. The governing council added 500 billion euros to its pandemic emergency stimulus bond purchases, bringing the total to 1.85 trillion euros ($2.2 trillion), and extended the regular purchases through at least March 2022. More than half of that total is still waiting to be deployed.

The bond purchases are a way of pumping newly created money into the economy, which aims to raise inflation from levels that are currently considered too low. The purchases also keep market interest rates down so that companies can access the credit they need to get through the pandemic recession.

One result of the purchases is that governments can use the bond market to borrow cheaply as their deficits rise through spending on pandemic support, such as paying salaries for furloughed workers to avoid layoffs.

Additional stimulus is on the way from the EU’s 750 billion-euro fund established to support the recovery through shared borrowing by member countries — a step toward further solidarity and integration among the 27-member EU. The fund is to support projects that reduce emissions of carbon dioxide, the main greenhouse gas blamed for climate change, and that promote the spread of digital technology and infrastructure.

The European Union’s executive commission forecasts that the eurozone economy shrank 7.8% last year. Official numbers for last year are to be released Feb. 2.

The bank left interest benchmarks untouched. Those are zero for short term loans from the ECB to banks, and minus 0.5% on deposits left overnight at the ECB by banks. The negative rate is a penalty aimed at pushing banks to lend the money rather than leave it at the ECB.

The ECB is the chief monetary authority for the countries that use the euro, playing a role analogous to that of the Federal Reserve in the U.S. It sets key interest rate benchmarks and supervises banks. So far, 19 of the 27 EU countries have joined the euro.

World Leaders Cheer US Return to Climate Fight Under Biden