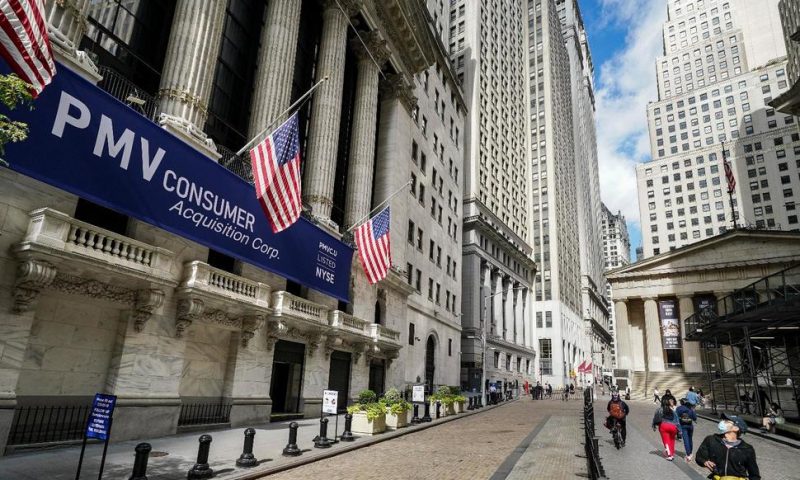 Stocks are ticking higher on Wall Street Wednesday following a mixed set of reports on the economy.

Stocks are ticking higher on Wall Street Wednesday following a mixed set of reports on the economy.

Banks and communication services stocks powered much of the rally. JPMorgan Chase was up 3.9%, while Disney climbed 3.1%. Smaller company stocks also were on track for more gains. The Russell 2000 small-caps index was up 0.9% and on pace for its second straight all-time high.

Overnight, Wall Street had seemed to be heading for a rockier day of trading. U.S. stock futures initially dropped after President Donald Trump said that he may not sign the $900 billion rescue for the economy that Congress just approved. But they eventually drifted upward as investors looked past the unexpected push back.

Markets around the world were relatively buoyant. Many Asian and European stock markets also rose, while Treasury yields climbed. Thin trading in this holiday-shortened week could make market moves more erratic. So could investors looking to close out positions as the end of the year approaches.

An hour before trading began on Wall Street, the government released an avalanche of data on the economy that showed some optimistic signs and several disappointing ones.

The most encouraging one said fewer U.S. workers filed for unemployment benefits last week. The number is still incredibly high compared with before the pandemic, but it was better than economists were expecting. It also meant at least a temporary halt to the increase in unemployment claims the economy had been suffering as the pandemic worsens and tightens its chokehold on the economy.

Another report said that orders for long-lasting goods strengthened by more than expected last month, a good sign for the nation’s manufacturers.

Other data reports were more grim, though. Consumers pulled back on their spending by more last month than economists expected. It was the first drop since April, and it’s a discouraging signal for an economy that’s driven mostly by consumer spending. A big reason was the sharp drop in incomes that Americans took in November, worse than economists had forecast.

The resurgent pandemic is pushing governments around the country and world to bring back varying degrees of restrictions on businesses. Those, plus lost sales for companies from customers scared to do business amid the pandemic, are dragging the economy down following its initial bounce-back from its springtime plunge. A new, potentially more infectious coronavirus strain identified in southern England is raising worries further.

The hope in markets had been that $900 billion in economic support that Congress approved Monday night could tide the economy over until widespread vaccinations could help the world begin a return to normal next year. The package includes one-time cash payments to most Americans, extra benefits for laid-off workers and other financial support.

But Trump said late Tuesday that he wants to see bigger cash payments going to most Americans, up to $2,000 for individuals. He also criticized other parts of the bill.

Trump did not specifically say he would veto the bill. But if he did, it may nevertheless have enough support within Congress to override the veto after passing both the House and Senate by lopsided margins.

Wall Street’s gains on Wednesday were modest but widespread. Roughly three out of four stocks in the S&P 500 were rising, and stocks of companies that would benefit the most from a healthier economy were doing the heaviest lifting.

Travel-related stocks also clawed back some of their sharp losses from earlier in the week, when countries around the world blocked flights from London and raised worries about more restrictions due to the new coronavirus strain. Cruise-operator Carnival rose 5.7%, and American Air Lines Group gained 2.7%.

In European stock markets, indexes rose as France reopened its border to some British trucks and passengers following a two-day blockade. Negotiators were also nearing a deal that would prevent a chaotic turn for commerce in the region on New Year’s Day due to the United Kingdom’s split from the European Union.

Asian markets rose. The World Bank said it expects China’s economy to grow 2% this year over 2019 and to accelerate to 7.9% growth in 2021. China is the only major economy on track to grow this year while activity in the United States, Europe and Japan shrinks.