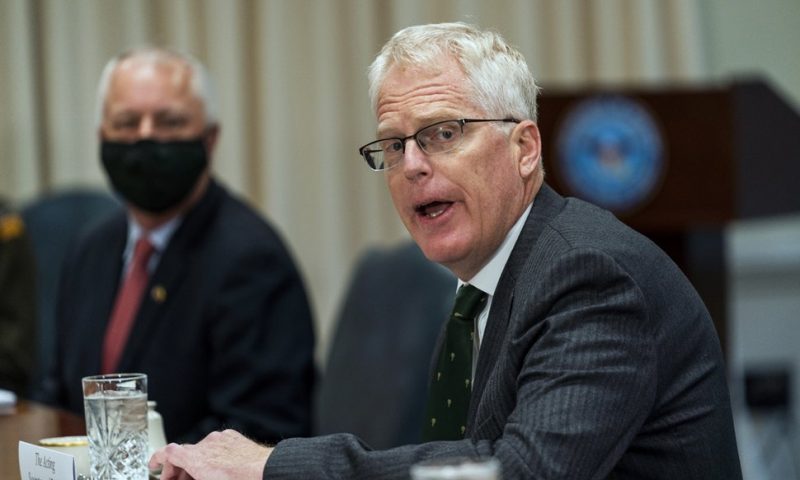 The secret trip, the second by a Pentagon leader in the last week, comes amid a worsening security situation and pressure from President Donald Trump to withdraw.

ACTING SECRETARY OF Defense Christopher Miller on Tuesday made a surprise trip to Kabul, the second such foray into America’s oldest warzone by a senior Pentagon official within the last week.

The visit, which the Defense Department kept confidential for safety concerns, comes amid a worsening security situation in Afghanistan, and in the aftermath of President Donald Trump’s lame-duck order to halve the number of U.S. forces there down to 2,500 by the week before President-elect Joe Biden’s inauguration. It also follows fears by those who spent much of the last two decades overseeing the war that U.S. defeat there is inevitable.

“So I’m the guy who’s drawing it down to 2,500 on the president’s behalf,” Miller said at a lunch with troops stationed in Kabul, according to Military.com. “I firmly believe that’s the right thing to do.”

A readout from the Pentagon said Miller discussed with Afghanistan President Ashraf Ghani “the historic opportunity for peace, the continued U.S. support for the Afghanistan National Defense and Security Forces, and the importance of achieving a reduction in violence to advance the peace process.”

Army Gen. Mark Milley also visited Kabul to meet with Ghani last Wednesday after direct talks with Taliban representatives in Doha, Qatar, the day before – a highly unusual personal engagement with insurgent forces for the chairman of the Joint Chiefs of Staff.

Ghani’s government has been relatively quiet about the announcements in recent weeks and subsequent pressure from the Trump administration to reach an agreement with the Taliban. The Aspen Security Forum think tank announced on Friday it had canceled an event with Ghani originally scheduled for the following Monday without offering an explanation.

Violence in Afghanistan has escalated in recent months despite a peace agreement the White House signed with the Taliban in February, part of which remains classified, that was reportedly reached without full consultations with the U.S.-backed government in Kabul. The deal calls for a staged withdrawal of U.S. forces if the terms are upheld and for the Taliban to begin negotiations with Ghani’s government, which the insurgent network considers a puppet regime of the West. Those talks have largely stalled.

Ryan Crocker, the former ambassador to Afghanistan, told Congress days after Trump’s withdrawal order in November that meetings with the Taliban “are surrender talks.”

“We are waving the white flag, basically saying to the Taliban, ‘You win, we lose. Let’s dress this up as best we can,’ an eerie reminder of the [1973] Paris peace talks on Vietnam,” Crocker, who also served as ambassador to Iraq, Pakistan, Syria and Kuwait, told the House Armed Services Committee.

Trump has also shaken up the Pentagon leadership since losing the November election, including firing his former defense secretary and installing Miller.