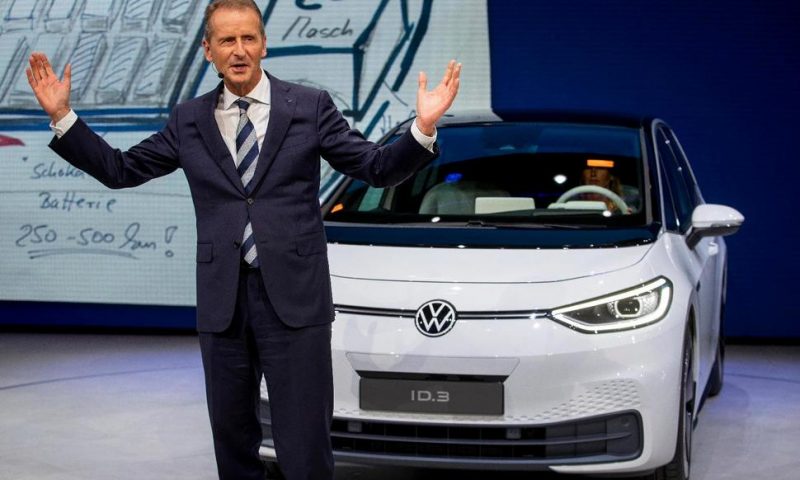 Volkswagen’s board has given CEO Herbert Diess a vote of confidence for his efforts to push the giant auto company into the new fields of digital services and electric cars.

FRANKFURT, Germany — The board of automaker Volkswagen has given CEO Herbert Diess a public show of support for his push into digital and electric cars after media reports Diess had clashed with the company’s powerful labor representatives over issues including top personnel decisions.

The board statement Monday said Diess and his team had the board’s “full support not only when it comes to the new orientation towards electromobility and digitalisation, but also the increase of efficiency and profitability.” It underlined a commitment to cutting cost and announced a new chief financial officer whose primary focus is to be on further efficiency increases.

German news media had reported that Diess faced resistance to some of his decisions from employee representatives, and that he had sought an early extension of his contract as a show of support. The board statement Monday made no mention of Diess’ contract, which expires in April 2023. Workers hold an unusual amount of clout at Volkswagen, through requirements that worker representatives hold board seats and because the company’s home state of Lower Saxony holds a stake in the company.

The vote of confidence in Diess comes as the company copes with sweeping changes in the auto industry such as a shift to electric cars, which can require fewer workers to assemble, and digitalization, which means new demand for software engineers and a differently skilled workforce. The board said Diess, 62, and the board had a mandate “to organise the necessary reduction of staff” and that worker representatives and management would agree by the end of the first quarter next year on a plan to cut fixed costs by 5%.

The board announced several new appointments to top management, including promoting Arno Antlitz to succeed CFO Frank Witter next year; Antlitz is head of finance and legal at the Volkswagen Group’s luxury Audi division, a key driver of profits. A new board post for technology would be filled by components chief Thomas Schmall, and Murat Aksel will take over group purchasing, a function he holds at the Volkswagen brand level.