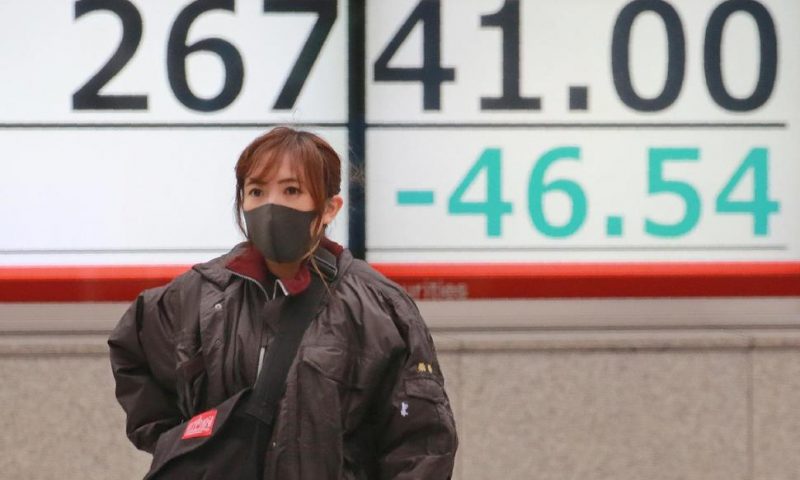 Shares are mixed in Asia after the S&P 500 and Nasdaq composite index both set fresh record highs.

Asian shares advanced Wednesday after Wall Street kicked off December with more milestones, as a broad rally pushed the S&P 500 and Nasdaq composite to new highs.

Australia reported its economy expanded 3.3% in the July-September quarter as the country recovered from pandemic lockdowns. That lifted the country out of recession, although in annual terms the economy contracted 3.8% from a year earlier.

“The rebound in Q3 GDP reversed around 40% of the decline during the first half of the year and we expect output to return to pre-virus levels by mid-2021,” Ben Udy of Capital Economics said in a commentary.

Renewed talk of a possible U.S. stimulus package failed to drive major gains in Asia, however, as investors adopted a “wait and see” stance after so many failed attempts to forge an agreement on additional help as the U.S. endures fresh waves of coronavirus infections and precautions.

Overnight, the S&P 500 gained 1.1% to 3,662.45, with Big Tech companies and banks driving a big part of the rally. The strong opening to December follows a 10.8% surge for the broad index in November, marking its best month since April. The tech-heavy Nasdaq climbed 1.3% to 12,355.11. Both indexes beat the record highs they set on Friday. Treasury yields also rose in another sign of optimism from investors.

Stocks have been ramping higher in recent weeks as investors focus on the possibility that coronavirus vaccines could soon help usher in a fuller global economic recovery.

Investors are looking beyond the shocks from a resurgence of the virus to focus on promising progress on vaccine development. Several pharmaceutical companies have reported encouraging data recently suggesting their vaccine candidates are highly effective, raising hopes the economy will begin to turn around next year as the vaccines are distributed to a world beaten down by the COVID-19 pandemic.

The Organization for Economic Cooperation and Development said in a report that the world economy will bounce back to its pre-pandemic levels by the end of next year, though the recovery will be uneven across the countries and many risks remain.

European regulators could approve a coronavirus vaccine developed by drugmakers Pfizer and BioNTech within four weeks. The companies have already asked for approval to begin vaccinations in the U.S. in December. Moderna is also asking U.S. and European regulators to allow emergency use of its COVID-19 vaccine.

Traders are also holding out hope that Democrats and Republicans may reach a deal on some amount of economic stimulus for the economy before 2021, but the parties remain divided on the details and the cost.

Biden on Tuesday repeated calls for Congress to pass immediate pandemic relief funding even before he takes office.

Salesforce.com shares fell 4% in after-hours trading after the business software pioneer announced it is buying work chatting service Slack for $27.7 billion. The acquisition is by far the largest in the 21-year history of San Francisco-based Salesforce.

The yield on the 10-year Treasury was steady at 0.92% after jumping from 0.83% late Monday, a big move. The higher yields also helped bolster financial stocks, since they allow banks to charge more lucrative interest rates on loans.

In other trading, U.S. benchmark crude oil shed 47 cents to $44.08 per barrel in electronic trading on the New York Mercantile Exchange. It lost 79 cents to $44.55 per barrel on Tuesday. Brent crude, the international standard, declined 45 cents to $46.97 per barrel.

The OPEC oil producers’ cartel continued talks Tuesday about how much to pump next year as countries wrestled over whether to extend the production cuts that have been supporting prices depressed by the pandemic.

Members put off from Tuesday to Thursday a meeting with non-OPEC oil producers like Russia, who have been coordinating their actions with the cartel in recent years to increase their influence.

The pandemic has sapped demand for fuel across the economy, leading oil producers to cut back production this year to keep prices from sagging even further. Yet lower output means less revenue for governments depending on oil sales to fill state coffers.