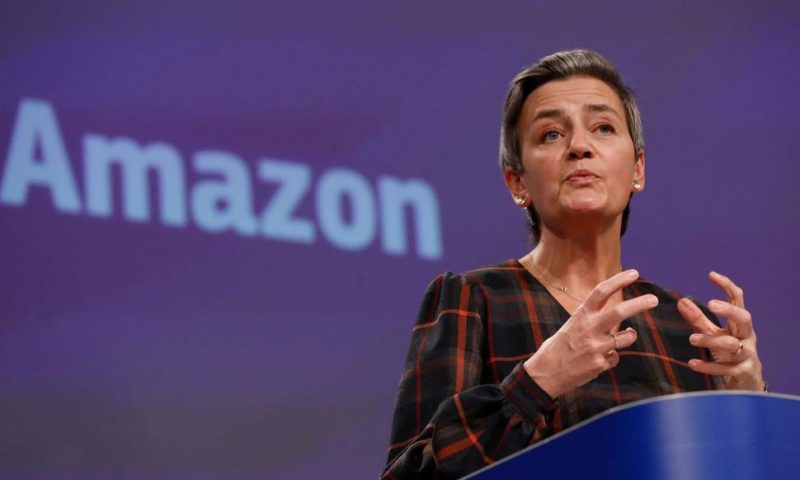 European Union regulators have filed antitrust charges against Amazon, accusing the e-commerce giant of using its access to data from companies that sell products on its platform to gain an unfair advantage over them.

European Union regulators have filed antitrust charges against Amazon, accusing the e-commerce giant of using its access to data from companies that sell products on its platform to gain an unfair advantage over them.

The charges, filed two years after the bloc’s antitrust enforcer began looking into the company, are the latest effort by European regulators to curb the power of big technology companies. Margrethe Vestager, the EU commissioner in charge of competition issues, has slapped Google with antitrust fines totaling nearly $10 billion and opened twin antitrust investigations this summer into Apple. The EU’s executive Commission also opened a second investigation Tuesday into whether Amazon favors product offers and merchants that use its own logistics and delivery system.

While the U.S. initially criticized the EU for targeting American companies, it has more recently started taking a tougher line on big tech as well, suing Google this year for abusing its dominance in online search and advertising.

The EU investigation found that Amazon is accessing and analyzing real-time data from other vendors that sell goods on its platform to help it decide which new products of its own to launch and how to price and market them. That “appears to distort genuine competition,” Vestager said.

Investigators focused on that practice in France and Germany, the company’s two biggest markets in the EU, but Vestager didn’t give specific examples of merchants affected by Amazon’s behavior.

The stakes have risen for retailers as many European countries have shut nonessential shops temporarily to try to contain the coronavirus pandemic, pushing more shopping online, where Amazon is a major presence.

Amazon faces a possible fine of up to 10% of its annual worldwide revenue. That could amount to as much as $28 billion, based on its 2019 earnings. The Seattle-based company rejected the accusations.

“We disagree with the preliminary assertions of the European Commission and will continue to make every effort to ensure it has an accurate understanding of the facts,” the company said in a statement, adding that it represents less than 1% of the global retail market and that there are bigger retailers in every country where it operates. Under EU rules, it can reply to the charges in writing and present its case in an oral hearing.

It could still be a while before a final decision as there are no deadlines for bringing an EU antitrust case to an end.

Vestager said that an analysis of millions of transactions and products listed on Amazon’s site found that “very granular, real-time business data” on third-party product listings and transactions was fed into algorithms for Amazon’s retail business that decide which new products to launch, their price and supplier.

Ordinary retailers take risks when they invest heavily to find new products, bring them to market and decide how much to sell them for, Vestager said.

“Our concern is that Amazon can avoid some of those risks by using the data it has access to,” she told reporters at a briefing in Brussels.

The preliminary conclusion, she said, is that by using the data Amazon can focus on the best-selling products, “and this marginalizes third-party sellers and caps their ability to grow.”

The EU’s second investigation will look at the criteria Amazon uses to decide which seller’s product gets chosen for the “buy box” and for its Prime membership service, and whether that means they get preferential treatment by the company’s logistics and delivery services.

The “buy box” lets shoppers add items directly to their shopping baskets. It features a single seller’s product even though multiple merchants might offer the item.