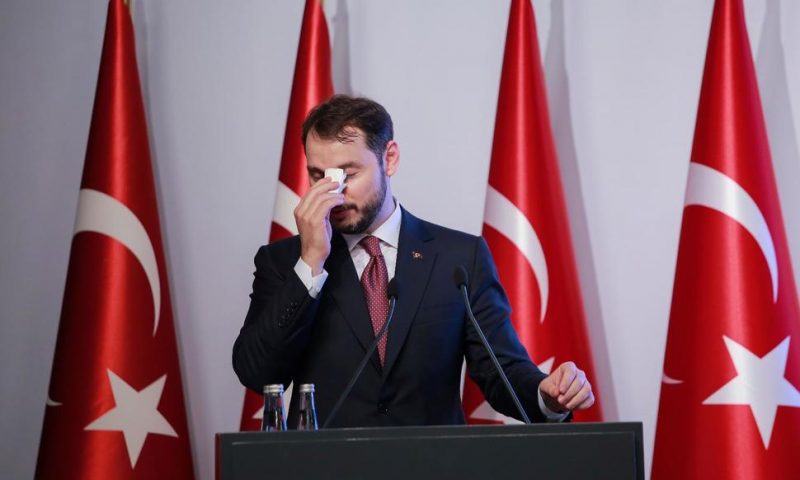 President Recep Tayyip Erdogan has accepted the resignation of his son-in-law from the position of finance minister.

ANKARA, TURKEY — President Recep Tayyip Erdogan has accepted the resignation of his son-in-law from the position of finance minister, the Turkish leader’s office announced Monday.

A statement from his office said Erdogan has accepted Berat Albayrak’s request “to be excused from his duties” but didn’t say who would replace him.

Albayrak, 42, announced late on Sunday that he was stepping down for health reasons and would spend more time with his family.

The country’s battered currency firmed against the dollar on Monday following his announcement, which came after the dismissal over the weekend of central bank chief Murat Uysal and his replacement by former Finance Minister Naci Agbal.

Albayrak, who has four children with Erdogan’s daughter Esra, has presided over a rough period in the Turkish economy. The country was recovering from a currency crisis in 2018 when the coronavirus pandemic hit and Albayrak’s stewardship came under much criticism.

The Turkish lira had lost around 30% of its value since the start of the year, hitting a record low of 8.58 against the dollar on Friday, while annual inflation has hit 11.89%.

“At a time when even developed nations experienced serious economic hardship due to the coronavirus pandemic … our country suffered the minimum amount of damage during that critical time, thanks to … Albayrak’s efforts,” said the statement from Erdogan’s office.

In a statement released Monday, the new central bank chief vowed to “decisively use all policy tools in pursuit of (the central bank’s) price stability objective.”

“The central bank will assess the current situation, review expectations, monitor developments closely, ahead of the bank’s Monetary Policy Committee meeting on Nov. 19,” he said.