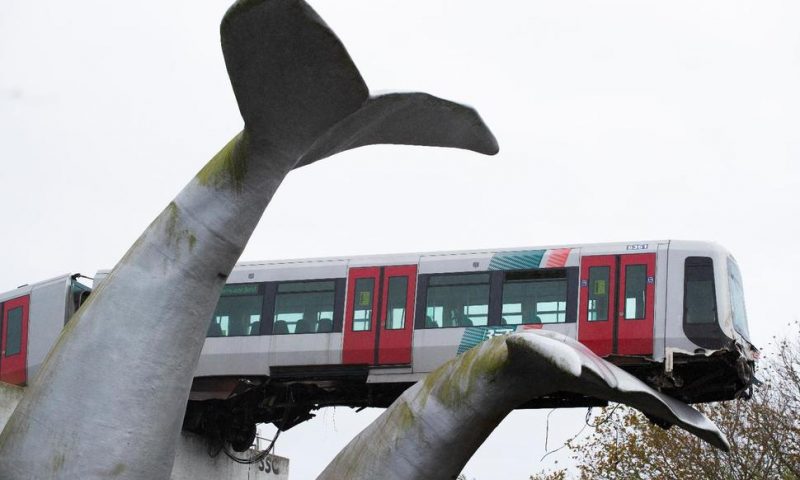 A metro train that overran the stop blocks at a station outside Rotterdam has been left balancing 10 metres above ground on the plastic tail of a whale sculpture.

The metro driver was reportedly able to free himself from the train without injury after the incident shortly after midnight on Monday morning. There were no passengers onboard.

Maarten Struijs, who made the sculpture of two tails emerging from water beneath the elevated metro line, said he was surprised the sculpture had held together.

He said: “I could never have imagined it that way, but it saved the operator’s life. The damage is an afterthought.

“I am amazed that it is so strong. When plastic has stood for 20 years, you don’t expect it to hold up a metro train.”

The artwork, Saved by the Whale’s Tail, was erected in 2002 by the De Akkers station in Spijkenisse on the outskirts of Rotterdam, in the Dutch province of South Holland. It is made of reinforced polyester.

The emergency services were seeking to secure the scene on Monday. “Given the complexity, this will take some time,” a spokesman for the Rotterdam-Rijnmond safety region said. “It will be quite an exercise to get that thing off and get it safe.”

It was as yet unclear what caused the train to overrun the station.

US Manufacturing Activity at Highest Levels in Two Years