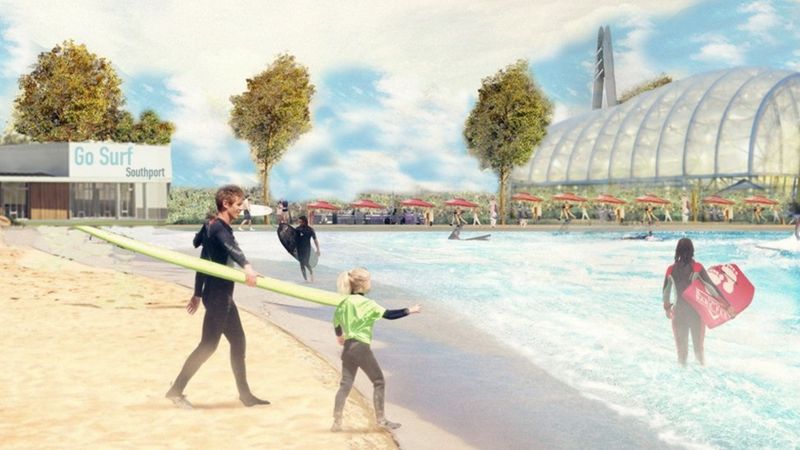 Plans to create a £40m “world-class” surfing complex near the seafront of a coastal resort have been revealed.

Southport Cove will see a “surf wave pool” and a 250m stretch of beach created alongside a spa and hotel, close to where the town’s lido once stood, a Sefton Council spokesman said.

The plans will be submitted as part of Southport’s Town Deal bid for part of the government’s £3.6bn Towns Fund.

The new complex would be created in partnership with water sports company Go Surf on the site next to Princes Park, near to the site of the former open-air swimming baths.

Councillor Marion Atkinson said the scheme would “bring back a viable facility” to the area and strike a balance between memories of the “well-loved” former lido and “a new, modern, family-oriented offer”.

A Go Surf spokesman said the complex would be “far more than just a place for catching waves”, adding that it would be something visitors “can enjoy on any given day of the year”.

“Our aim is to create a perfect environment where people meet with friends and family, be it to lounge on the beach or in the gardens, catch some waves, relax in the spa, or just grab a coffee and a bite to eat,” he said.

Asked about the proposals, some local residents told the Local Democracy Reporting Service it would be “brilliant”, while others seemed more bemused.

Louise Dale said it “would be amazing” for the town, while Rebecca Kenny said the plan was “brilliant and I’m really excited”, adding: “Southport has so much untapped potential.”

However, Lynn Walton said the idea of putting an “artificial beach right next to a natural beach that looks like a field” was something “you couldn’t make up”, while Michelle Hindle asked: “Is it April Fools Day already?”

Trump to gut protections in Alaska’s Tongass forest, the ‘lungs of the country