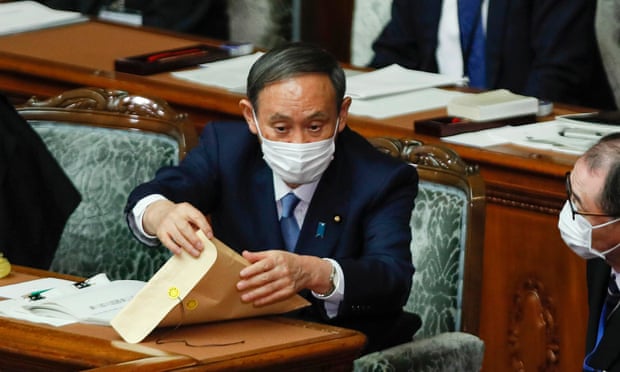 Japan’s prime minister, Yoshihide Suga, has said the country will become carbon neutral by 2050, heralding a bolder approach to tackling the climate emergency by the world’s third-biggest economy.

“Responding to climate change is no longer a constraint on economic growth,” Suga said on Monday in his first policy address to parliament since taking office.

“We need to change our thinking to the view that taking assertive measures against climate change will lead to changes in industrial structure and the economy that will bring about growth.”

To applause from MPs, he added: “I declare we will aim to realise a decarbonised society.”

Japan had come under pressure to strengthen its climate commitments after initially saying that it would achieve an 80% reduction in emissions by 2050 followed by carbon neutrality “as soon as possible” in the second half of the century.

The policy shift brings Japan into line with the European Union, which set itself a similar target last year, while China recently announced it would become carbon-free by 2060.

Doubts remain about Japan’s ability to achieve that goal given its heavy reliance on coal and other fossil fuels, and public opposition to increasing nuclear’s share of the energy mix almost 10 years after the triple meltdown at the Fukushima Daiichi nuclear power plant.

Suga, who replaced Shinzo Abe in mid-September, did not provide details on how Japan would reduce carbon emissions to zero, but said it would promote renewable energy and proritise safety as it seeks a bigger role for nuclear.

Suga said he would speed up research and development on key technologies such as next-generation solar batteries and carbon recycling, and promised to “fundamentally change Japan’s long-term reliance on coal-fired energy”.

But Japan, the world’s fifth-biggest emitter of carbon dioxide, has struggled to cut emissions since the 2011 Fukushima meltdown forced the closure of dozens of nuclear reactors, only a small number of which have restarted.

Greenpeace Japan welcomed Suga’s commitment to carbon neutrality, but said there should be no role for nuclear power.

“Nearly 10 years on from Fukushima we are still facing the disastrous consequences of nuclear power, and this radioactive legacy has made clear that nuclear energy has no place in a green, sustainable future,” the group’s executive director, Sam Annesley, said in a statement.

“If we are to achieve net zero by 2050, we must massively increase Japan’s renewable energy capacity, with a target of 50% renewable electricity by 2030. Anything less than 50% and Japan risks falling short of net zero, and more importantly risks driving the world above 1.5 degrees as per the Paris climate agreement.”

Chinese Fintech Could Shatter Records With $35B Share Offer