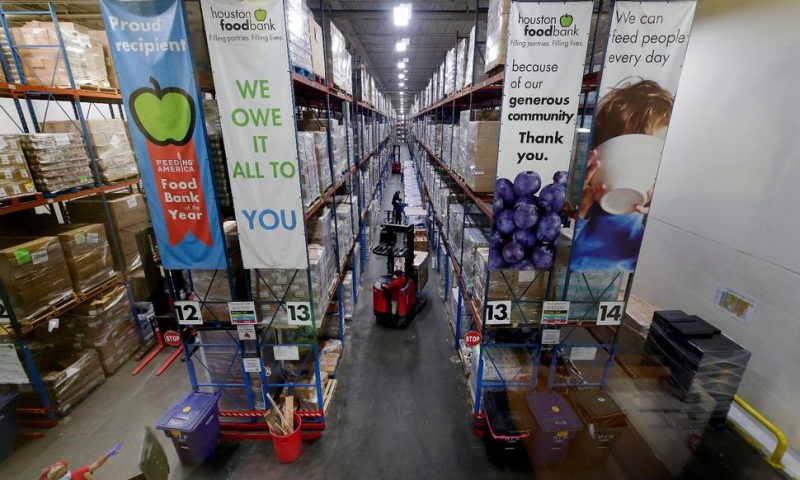 In lines of cars stretching more than half a mile, people thrown out of work by the coronavirus pandemic queue up with other needy people to receive some of the 1 million pounds of food distributed some days by the Houston Food Bank.

HOUSTON — In car lines that can stretch half a mile, (0.8 kilometers), workers who lost jobs because of the coronavirus pandemic and other needy people receive staggering amounts of food distributed by the Houston Food Bank. On some days, the hundreds of sites supplied by the country’s largest food bank collectively get 1 million pounds.

Among the ranks of recipients is unemployed construction worker Herman Henton, whose wife is a home improvement store worker and now the sole breadwinner for their family of five. They tried to get food stamps but were told they only qualified for $25 of federal food assistance monthly.

“As a man, as a father, as a provider I felt at a low point. I felt low,” Henton said as he waited in his car near West Houston Assistance Ministries, which gets food from the Houston Food Bank for its care packages aimed at helping feed families for a week. “In this type of situation there’s nothing you can really do.”

Distributions by the Houston Food Bank now average about 800,000 pounds (363,000 kilograms) daily after reaching the unprecedented 1 million pound mark for the first time in the spring, a level that the organization still delivers periodically.

Then workers in Houston and millions around the country were suddenly thrown out of work and forced to rely on the handouts.

“It had that feeling of a disaster, like the hurricanes in the Gulf,” Greene recalled. “It was shocking how the lines exploded so quickly.”

Almost overnight, one of America’s most ethnically and racially diverse cities became a symbol of a desperate need as the food bank scrambled to take in enough milk, bread, vegetables and meat from multiple sources to feed the hungry.

Many people in Houston and around the U.S. live paycheck to paycheck and were caught off guard by the economic fallout from the coronavirus that initially cost the nation 22 million jobs, with10.7 million that haven’t come back.

“Forty percent of households have less than $400 in order to weather a storm,” Greene said, referring to a Federal Reserve survey. “So, when this crisis hit the number of families who needed assistance was immediate and very large.”

After Henton was laid off, he and his wife ate one meal daily so their three children could have all three.

His family is one of about 126,500 that the Houston Food Bank has helped with boxes of food every week since March via its system powered by workers and volunteers who sort, box and pack the food onto trucks that deliver their loads to distribution centers throughout greater Houston’s suburban sprawl.

The federal government has helped meet demand with programs such as one that buys farm goods like vegetables, meat and dairy originally produced for now shuttered restaurants and gives it free to food banks and the distribution groups they work with.

But the money set aside for the U.S. Agriculture Department’s multibillion-dollar Farmers to Families program runs out at the end of October.

Individual food banks also get 20% to 40% of the food they distribute from other government programs, including one that helps farmers hurt by foreign tariffs by buying their produce, beef, pork and chicken and ensuring that producers get paid while edible food doesn’t end up in landfills. That program is funded so far through 2020.

The food banks get the rest of what they distribute from supermarket or farmer donations or buy it with donated cash.

Fitzgerald said the nation’s food banks have enough food to meet U.S. demand for now, but said distributors “are concerned about the future” as winter approaches.

Demand for food in the Houston area, long subjected to the volatility of the oil industry, will probably continue without more government relief for jobless workers, said Mark Brown, CEO of West Houston Assistance Ministries, which gives food to nearly 2,000 people each week.

“I think we will have an elevated need in our community for at least two years,” he said.

The charity was founded in 1982 to help people during an oil bust that eliminated 225,000 jobs and toppled the city’s real estate market. The group also helps people pay their rent and find work.

On one recent food distribution day, many people waiting in their cars with the tailgates open so bags could be easily loaded in their vehicles in a socially distant way were reluctant to speak about their economic misfortunes or other reasons for lining up.

Unemployed stagehand Priscilla Toro said she was embarrassed at having to resort to the free food line but added: “We have to get by. We’ve got to eat.”

Henton said he was simply thankful that he and many others can feed their families with the extra help.

“It can happen to anyone,” he said.

US Stocks Shake off a Wobbly Start and End Mostly Higher

Asian Shares Little Changed on Uncertainty Over US Election