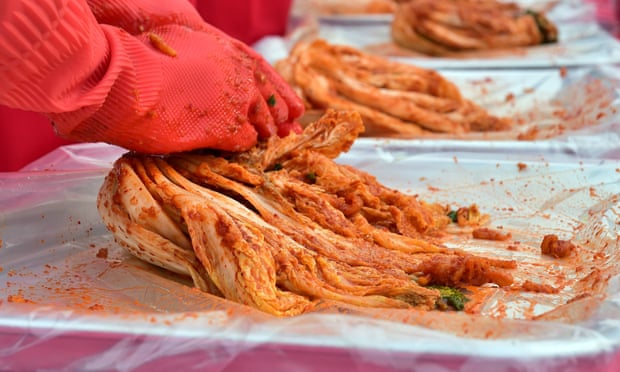 South Koreans are facing a shortage of a beloved dietary staple after a summer of extreme weather destroyed crops of cabbages – the main ingredient of kimchi.

In what is being described a full-blown crisis, fields of Napa, or Chinese cabbages were wiped out in August and September, when the Korean peninsula was struck by typhoons, floods and landslides, sparking a sudden spike in the vegetable’s price.

The damage has left households struggling to find affordable cabbages to turn into the spicy pickle, which accompanies almost every meal in South Korea and has become a popular “superfood” around the globe, from burger fillings to pizza toppings.

The shortage, which has seen prices rise by up to 60%, comes just before the start of the traditional kimchi-making season, when people who prefer to make their own version season cabbages with chilli powder, garlic, and other ingredients before leaving it to ferment.

The communal act of making kimchi, known as kimjang, was added to Unesco’s intangible cultural heritage list in 2013.

The UN body said the tradition “forms an essential part of Korean meals, transcending class and regional differences. The collective practice of kimjang reaffirms Korean identity and is an excellent opportunity for strengthening family cooperation”.

But this year the autumnal rite got off to a slow start after crops were ruined by an unusually long rainy season and three powerful typhoons late this summer.

The cabbage shortfall is also affecting commercial producers, according to Bloomberg, with the country’s biggest kimchi maker, Daesang, saying it has been forced to suspend online sales.

Another said it was looking for alternative supplies – possibly from China, a major cabbage exporter – to meet higher demand as more people choose to eat at home during the coronavirus pandemic.

“Cabbage in particular is quite sensitive to climate change and any sort of extreme weather will be detrimental to its output,” Kim Dajung, a research fellow at the Korea Rural Economic Institute, told Bloomberg. “While prices are starting to stabilise, uncertainties over price will continue to persist until the kimjang season begins in mid-November.”

Kimchi is an indispensable part of the Korean diet, with South Koreans eating more than 2m tonnes every year.

Though it often appears in stews and soups, no meal is considered complete without a side dish of the pungent, fermented cabbage, along with kimchi variations made from daikon radish, cucumber, perilla leaf or other seasonal vegetables.

There are an estimated 200 varieties, from the milder, crunchy version preferred in the north to the more pungent pickle commonly eaten further south.

According to South Korea’s cultural heritage administration, about 95% of Koreans eat kimchi more than once a day, storing it in separate fridges to prevent it from tainting other items such as milk. More than 60% percent have it for breakfast, lunch and dinner.