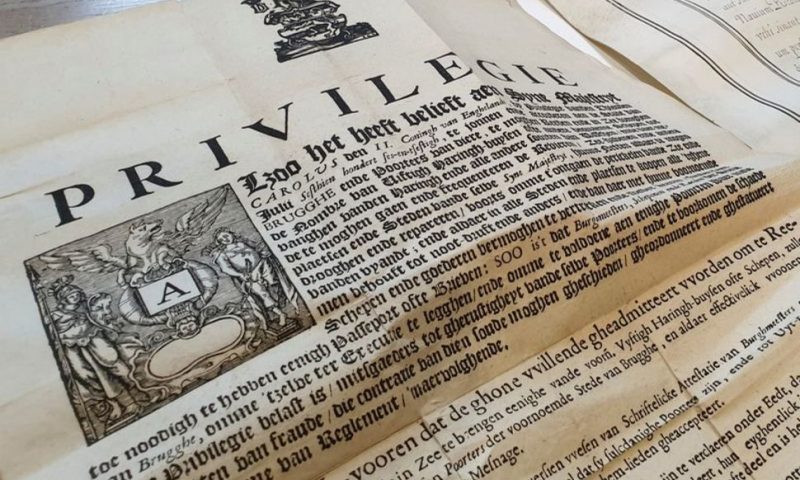 BRUGES, Belgium – Belgium may resort to a 17th century charter granted by a British king to retain fishing rights in Britain’s coastal waters if London and the European Union fail to agree a trade deal by the end of this year.

With just over two months until Britain ends its transition period out of the EU, Belgium will lose access to much of the area it fishes in the North Sea if there is no deal.

However, a document in Latin issued to Flanders in July 1666 by Britain’s King Charles II gives 50 Flemish fishing boats access to British waters for perpetuity.

“Knowing how Britain is attached to old habits and old laws, it may have a chance,” said Jan d’Hondt, the head archivist in the port city of Bruges, as he showed the large, yellowing paper document.

Charles II signed the document as a gesture to the city that gave him refuge after his father was beheaded during England’s Civil War in 1649, granting the citizens of Bruges, or “Civitas Brugensis”, the right to use 50 fishing boats in British waters.

While today Belgian boats no longer sail from Bruges but from nearby Zeebrugge, the document known as the Privilege is still valid, according to Hilde Crevits, economy minister of the Belgian region of Flanders.

“More than half of our fishing income comes from fish caught in British waters. So if we lose access to that British water or if our quotas go too far down, it could be the death knell for our fisheries,” Crevits told Reuters TV.

“As a consequence, if you have a very old document… where the king says you have the eternal right to sail with 50 boats in those coastal waters, yes then we will use that if necessary,” she said.

“Where would we have to fish then? We can’t go anywhere,” Campbell said, standing in front of his red and white trawler. “I have hope in that document.”

Britain and the EU resumed their talks on Thursday on a post-Brexit trade deal, with fisheries among several sensitive issues still blocking the way to an agreement.

Britain has said other treaties supersede the charter, including the U.N. Convention on the Law of the Sea (UNCLOS), which grants countries rights to their territorial waters up to 12 nautical miles and rule over economic zones up to 200 nm.