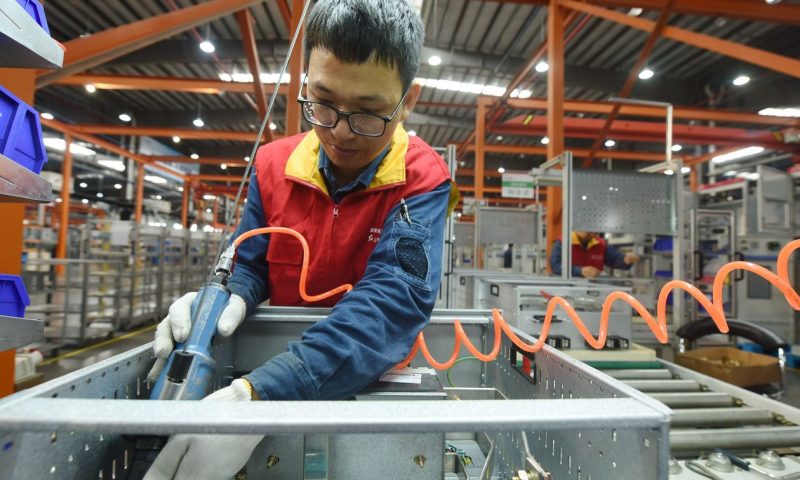 Shares advanced in Asia on Monday after China reported its economy grew at a 4.9% annual pace in the last quarter, with consumer spending and industrial production rising to pre-pandemic levels.

China was the first country to suffer coronavirus outbreaks and the first to emerge from the pandemic and begin reopening its economy. After contracting 6.8% in the first quarter of this year the economy grew 3.2% in the April-June quarter.

The 2.7% quarterly expansion was weaker than expected. Still, the recovery of Asia’s largest economy is good news for other countries that rely heavily on trade with China, including Japan. It reported Monday that its exports fell at a slower pace in September from a year earlier, partly thanks to higher demand from China.

The National Bureau of Statistics reported that industrial production rose 5.8% in July-September over the same quarter last year, a marked improvement over the first half’s 1.3% contraction.

Retail sales rose 0.9% over a year earlier, up from a 7.2% contraction in the first half as consumers, already anxious about a slowing economy and a tariff war with Washington, tightened their belts.

Meanwhile, hopes for new stimulus for the U.S. economy were muted, with House Speaker Nancy Pelosi saying time is running out to get measures passed before the Nov. 3 election.

Wall Street closed out a choppy week of trading with more of the same Friday, as a late-afternoon stumble led U.S. stock indexes to a mixed finish.

The mixed performance matched the mixed data: the U.S. government reported that retail sales rose in September for the fifth straight month, while the Federal Reserve said U.S. industrial production had its weakest showing since the spring.

Stock indexes have recouped most of their losses from a swoon as talks between Democrats and Republicans on an economic stimulus package failed to deliver results. Investors have been hoping that Washington would provide more financial support for the economy since July, when a $600-a-week extra benefit for the unemployed expired.

On Thursday, the government’s said the number of Americans seeking unemployment aid increased last week to 898,000, a historically high level reflecting the weakness due to the pandemic and ensuing recession.