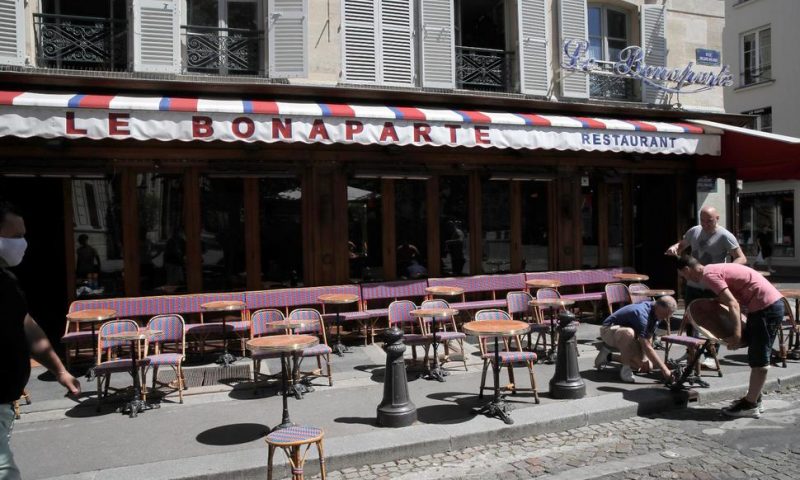 The economy of the 19-country eurozone shrank by a devastating 12.1% percent during the second quarter from the quarter before as coronavirus lockdowns froze business and consumer activity.

PARIS — The economy of the 19-country eurozone shrank by a devastating 12.1% percent during the second quarter from the quarter before as coronavirus lockdowns froze business and consumer activity. It was the largest drop on record.

Spain, which suffered a severe virus outbreak that devastated its tourism industry, was the hardest hit with a 18.5% drop. Italy and Portugal also suffered steep declines, but no country escaped the impact of the pandemic.

For the currency union as a whole it was the biggest decline since the records started in 1995. For the broader 27-country European Union, not all of whose members use the euro, output sagged 11.9%. The decline in Europe compares with a 9.5% quarter on quarter drop in the United States.

European governments are countering the recession with massive stimulus measures. EU leaders have agreed on a 750 billion-euro recovery fund backed by common borrowing to support the economy from 2021. National governments have stepped in with loans to keep businesses afloat and wage support programs that pay workers’ salaries while they are furloughed. The European Central Bank is pumping 1.35 trillion euros in newly printed money into the economy, a step which helps keep borrowing costs low.

Those support measures have helped keep unemployment from spiking. The rate rose to 7.8% in June from 7.7% in May. But many job losses will wind up being permanent despite the stimulus. Major companies such as Lufthansa, Daimler and Airbus have said they will cut thousands of jobs.

Economists say the worst of the downturn is past, concentrated in the months of April and May. Many restrictive measures have been eased, and business confidence in Germany, the biggest eurozone economy, has ticked up for three straight months.

But the outlook is for a long and uncertain climb back to pre-virus levels that could take until 2022 or longer. Company forecasts for the rest of the year assumed that there is not a renewed outbreak of COVID-19, the illness caused by the coronavirus. Cases have been rising again in several countries as people go on vacations and Britain slapped a 14-day quarantine on travelers returning from Spain.

The Spanish contraction was by far the sharpest slump since the country’s national statistics agency began collecting data. Spanish Prime Minister Pedro Sánchez was meeting later Friday with the leaders of Spain’s regions to discuss how to rebuild the economy and where to deploy billions of euros in European Union aid for recovery.

Germany, the largest of the countries that use the euro, went through a 10.1% decline, the biggest since records started in 1970.

In France, the startling plunge of 13.8% in April-June demonstrated the cost of its two-month lockdown. It was the third consecutive quarter of contraction in France’s worsening recession. The pain has been so damaging to jobs and industries that the government is talking down the possibility of another nationwide lockdown as infections tick upward again.

France’s economy was already shrinking in the last quarter of 2019, before the coronavirus pandemic hit.

“All the growth in GDP seen in the 2010-2019 decade has been wiped out in five months,” said Marc Ostwald, chief economist at ADM Investor Services International. In Italy’s case, economists said it wiped out about 30 years of growth.