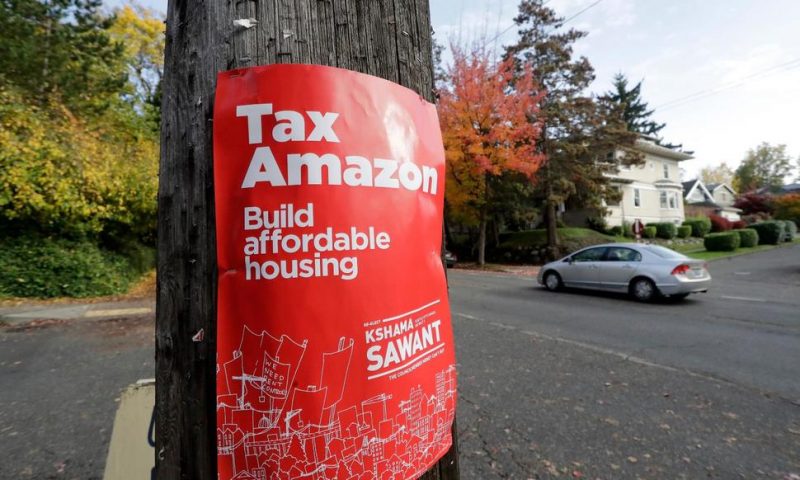 The Seattle City Council has approved adopting a new tax on big businesses, two years after the council repealed a similar tax amid pressure from corporations such as Amazon and the prospect of a voter referendum.

SEATTLE — The Seattle City Council on Monday approved adopting a new tax on large businesses, two years after the council repealed a big business tax amid pressure from corporations such as Amazon and the prospect of a voter referendum.

The new tax called “JumpStart Seattle,” from lead sponsor and council member Teresa Mosqueda, will target companies with many highly paid employees, whereas the 2018 “head tax” would have applied to all employees at large companies.

“This is a huge win,” Mosqueda said. “This is about caring for Seattleites now and into the future. It will help Seattle survive the crisis of COVID and emerge stronger and more equitable.”

Under the new tax, companies with annual payrolls over $7 million will be taxed based on their pay to employees making over $150,000 per year. As amended in committee last week, the tax rate would range from 0.7% to 2.4%, with tiers for various payroll and salary amounts.

Money from the tax will be used to underwrite $86 million in coronavirus relief to shore up city services as Seattle emerges from the pandemic and over the long term to pay for affordable housing, business assistance and community development. The bill was amended Monday to exempt some health care organizations for three years during the coronavirus crisis and to allow the law to end, or sunset, 20 years after it is enacted.

Seattle Mayor Jenny Durkan hasn’t taken a hard position on the tax. But if she were to veto it, only six votes would be needed to override her veto.

Downtown Seattle Association President & CEO Jon Scholes said in a statement after the vote that taxing jobs is bad public policy, and that to him it is even more concerning as Seattle faces double-digit unemployment.

“Job taxes are counterproductive to job creation and have a history in Seattle of being enacted and then later repealed,” Scholes said. “This tax should follow that fate.”

The Seattle measure isn’t the first in the Northwest to focus on high earners and large businesses to pay for services as governments grapple with budget woes during the COVID-19 pandemic.

In May, voters in the Portland, Oregon, area approved a tax on the wealthiest residents and the biggest businesses in Portland, Oregon, to raise $2.5 billion over a decade to address homelessness. It put in place a 1% marginal income tax on the wealthiest residents and a 1% tax on gross profits for the region’s biggest businesses.

Take a look at this undervalued Gold mining company