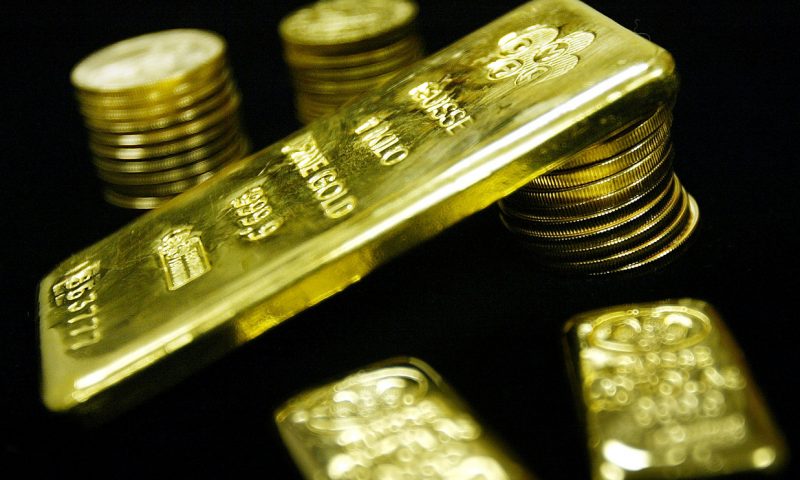 Silver futures up nearly 2% on Comex

Gold futures finished Monday at their highest prices in nearly a week, supported in part by a softer U.S. dollar, which provided a runway higher for the commodity even as global stocks rallied.

The U.S. dollar was off 0.5% in Monday dealings, as measured by the ICE U.S. dollar index DXY, 0.01%, a gauge of the buck against a half-dozen currencies. A weaker U.S. dollar can make assets priced in the currency more attractive to buyers using other monetary units.

“Seeing as dealers are keen to take on more risk today, it is likely that gold’s positive move is almost exclusively down to the weakness in the dollar,” said David Madden, market analyst at CMC Markets UK, in a market update.

Moves in the greenback came amid a broad rally in equities that has been attributed to a surge in Chinese markets. Beijing’s state-run media published a front-page editorial encouraging investors to buy stocks to support domestic markets.

Still, investors are wrestling with the climbing tally of new COVID-19 cases in the U.S., concentrated in a number of hot-spot states including Arizona and Florida.

“Bullion prices don’t typically jump because of social unrest or geopolitical strife. But if those stresses add to a financial crisis or economic slump,” gold prices can spiral higher, said Adrian Ash, director of research at BullionVault.

Gold saw some pressure, briefly giving up earlier gains that had lifted prices to as high as $1,799 shortly after economic data released Monday showed that the Institute for Supply Management’s index of nonmanufacturing companies jumped to 57.1% in June from 45.4% in May.

That marked the single-biggest increase since the survey was created in 1997. However, growth looked so strong because it occurred after a few months of extremely low activity.

In a daily note, he explained that “last week’s swing towards 2011 levels in U.S. dollar terms near $1,800 per ounce is attracting a flood of new interest, piling on top of January-June’s heavy demand.”

“Fear of missing out could spur a dramatic spike [in gold] if the economic, health and political news continues to darken,” Ash said. “Heaven forbid we get a hot, angry summer to match 2011. But rarely have there been so many tailwinds for gold.”

“The economic slump caused by Covid-19 has spurred record government deficits and central-bank inflation to try and offset it,” he said. “China’s power grab in Hong Kong is worsening geopolitical tensions ahead of November’s U.S. election, with the U.K.’s looming no-deal exit from the [European Union] now baked in the crust for December.”

Will China’s epic 5.7% stock-market rally collapse on itself like 2015?

Hiring Soared in May as Mass Layoffs Eased