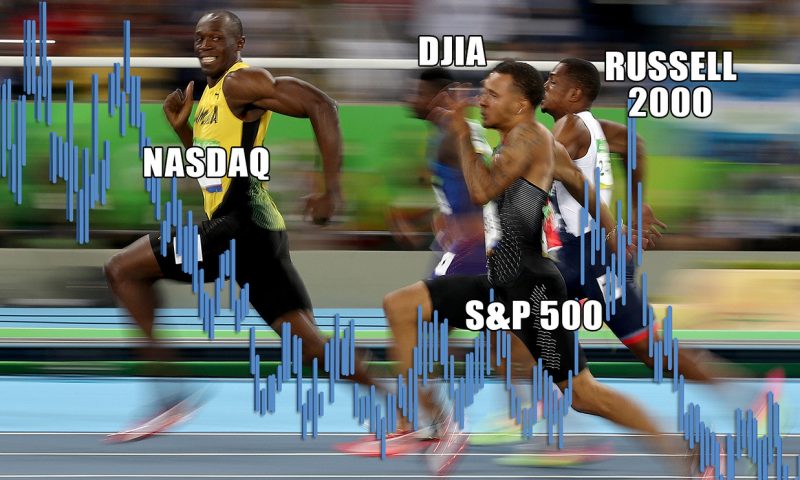 The chasm between the Nasdaq Composite and its rival benchmarks in the first half of 2020 has been much like that between Olympic sprinter Usain Bolt and everyone else in the world.

The technology-laden index has enjoyed an ever-widening lead between itself and the Dow Jones Industrial Average DJIA, +2.32% and the S&P 500 index SPX, +1.46% so far this year due to its perceived resilience against the COVID-19 pandemic that wreaked havoc on financial markets and the economy starting in March.

The Nasdaq is up 10% year to date, while the Dow is down 10.8% so far, the S&P 500 is down around 6% and the small-capitalization Russell 2000 index is off more than 15% in the first six months of a dramatic year of events headlined by the viral outbreak.

The main benchmarks have actually staged a powerful resurgence from a rout induced by worries about the economic damage from closures and social-distancing measures implemented to curtail the spread of the deadly contagion that has recently gathered more momentum in a number of states.

Indeed, the last time the Nasdaq has been higher in the middle of the year while the Dow and S&P 500 were down was 1977, according to Dow Jones Market Data, and that this is only the second such occurrence in the existence of the Nasdaq, which was first established in 1971.

Some of the outperformance is due to a handful of growthy Nasdaq stocks that have surged this year, including Apple Inc. AAPL, +2.30%, Microsoft Corp. MSFT, +1.07%, Amazon.com AMZN, -0.46%, Google parent Alphabet Inc. GOOG, +2.57% GOOGL, +2.54% and Facebook Inc. FB, +2.11%, which have contributed outsize returns to the market-capitalization-weighted Nasdaq, and to the S&P 500 to a lesser extent, the Wall Street Journal wrote.

The Dow’s 30 components, meanwhile, have been considered more attuned to the economic outlook in the aftermath of the viral outbreak, while the Nasdaq is viewed as a wager on the stocks that may be more resilient to the public health crisis.

That being said, back in 1983, the Dow and the S&P eventually went on to outperform the Nasdaq. The Dow gained 3%, the S&P 500 fell 1.89% and the Nasdaq Composite tumbled a gut-wrenching 12.58% in the remaining six-month period.

Micron shows how the cloud is saving chip makers