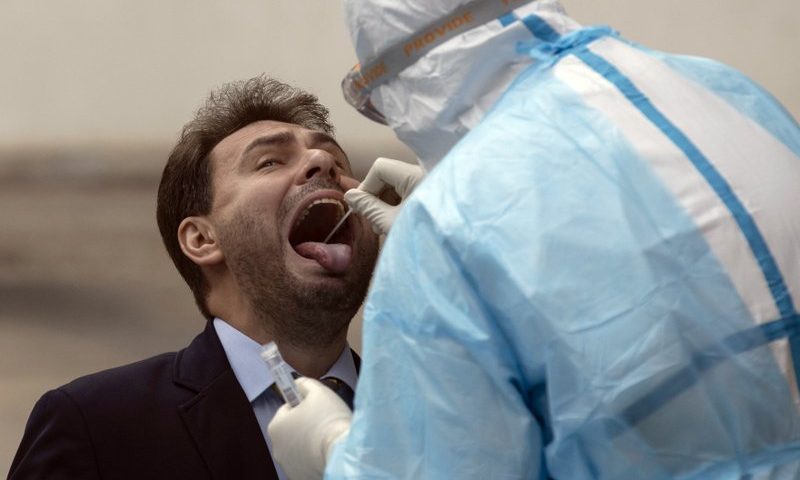 South Korea’s central bank lowered its policy rate to an all-time low of 0.5% to soften the pandemic’s shock to the country’s trade-dependent economy, which it says may shrink for the first time in 22 years.

The Latest on the coronavirus pandemic. The new coronavirus causes mild or moderate symptoms for most people. For some, especially older adults and people with existing health problems, it can cause more severe illness or death.

TOP OF THE HOUR:

— Long Island is the latest region of New York to begin easing restrictions put in place to curb the coronavirus.

— Professional sports can resume in Pennsylvania.

SEOUL, South Korea — South Korea’s central bank lowered its policy rate to an all-time low of 0.5% to soften the pandemic’s shock to the country’s trade-dependent economy, which it says may shrink for the first time in 22 years.

The Bank of Korea’s rate cut on Thursday came about two months after it executed its first emergency rate cut since 2008 to bring the policy rate to 0.75%.

The bank also adjusted its annual growth outlook from a 2.1% expansion to a 0.2% contraction. The country’s economy hasn’t seen an annual contraction since 1998, when it was in the midst of a crippling financial crisis.

By lowering borrowing costs, the bank intends to ease the volatility in financial markets and help pump money into the economy.

But some experts say it’s unclear whether traditional financial tools to boost money supplies would be effective now when the pandemic has damaged both supply and demand.

The Bank of Korea said last month that South Korea’s economy shrank 1.4% during the first three months of the year, the worst contraction since late-2008. Domestic consumption took a hit as more people stayed home to avoid virus transmissions, while exports also shrank amid worldwide lockdowns.

SEOUL, South Korea — South Korea has reported 79 new cases of COVID-19, its biggest daily jump in more than 50 days, a huge setback that threatens to erase some of the country’s hard-won gains against the virus.

The Korea Centers for Disease Control and Prevention on Thursday said 67 of the new cases were reported from the densely populated Seoul metropolitan area, where about half of South Korea’s 51 million people live. The national totals were at 11,344 cases and 269 deaths.

The country had reported 40 new cases on Wednesday, which was its highest figure in 49 days.

Health Minister Park Neung-hoo during a virus meeting on Thursday pleaded all residents in the greater capital area to avoid unnecessary gatherings and urged companies keep sick employees off work.

At least 69 infections so far have been linked to workers at a massive warehouse operated by local e-commerce giant Coupang. Health authorities say the company likely didn’t enforce preventive measures such as masks at the facility in Bucheon, near Seoul, and may have had employees working even when sick.

Hundreds of other infections have been linked to nightclubs and other entertainment venues, which saw huge crowds in early May after officials relaxed social distancing guidelines.

It remains to be seen whether the recent spike in infections force officials to push back a phased reopening of schools, which they had touted as a major accomplishment in the nation’s anti-virus campaign. The Education Ministry on Wednesday said class openings were delayed at 561 schools nationwide because of virus concerns.

BEIJING — China announced two new cases of coronavirus, both from abroad, on Thursday as it moves to close the annual session of its ceremonial legislature that had been delayed for more than two months by the outbreak.

No new deaths were reported and just 73 people remained in treatment, while another 518 remain under isolation and observation for either suspected of having the virus or testing positive without showing any symptoms. China has reported a total of 4,634 deaths from COVID-19 among 82,995 cases.

The National People’s Congress is to conclude its meetings later Thursday with a news conference given by Premier Li Keqiang. Delegates to the congress have worn masked during full meetings at the Great Hall of the People although leaders such as Li and President Xi Jinping have generally gone without. On Wednesday, the congress’s advisory body held its closing session at which its chairperson,

Wang Yang, said it came at an “important time when major strategic achievements have been made by China in fighting COVID-19 and when China is endeavoring to secure a decisive victory in completing building a moderately prosperous society in all respects.”

That number is the best estimate and most assuredly an undercount. But it represents the stark reality that more Americans have died from the virus than from the Vietnam and Korea wars combined.

“It is a grim milestone,” said Josh Michaud, associate director of global health policy with the Kaiser Family Foundation in Washington. “It’s a striking reminder of how dangerous this virus can be.”

Worldwide, the virus has infected more than 5.6 million people and killed more than 350,000, with the U.S. having the most confirmed cases and deaths by far, according to a tally by Johns Hopkins University. Europe has recorded about 170,000 deaths, while the U.S. reached more than 100,000 in less than four months.

The true death toll from the virus, which emerged in China late last year and was first reported in the U.S. in January, is widely believed to be significantly higher, with experts saying many victims died of COVID-19 without ever being tested for it.

At the end of March, the United States eclipsed China with 3,500 deaths. Now, the U.S. has not only the highest death total, but the highest number of confirmed cases of COVID-19 in the world, making up more than 30% of the global total.

NEW YORK — The easing of some coronavirus restrictions Wednesday on Long Island left New York City as the only part of the hardest-hit U.S. state that has yet to begin the process of reopening the economy.

The projects require some federal funding or approval. Cuomo said he and the Republican president, who are often at odds, will talk again next week.

JUNEAU, Alaska — Four U.S. senators, including Lisa Murkowski of Alaska, are calling for a moment of silence to honor those who have died from COVID-19.

The moment of silence is planned for noon Monday.

The U.S. on Wednesday surpassed 100,000 deaths related to the pandemic, according to a Johns Hopkins University tally.

Murkowski, a Republican, said too many families have seen loved ones suffer or been unable to have proper memorials for those who have died.

“These impacts cannot be undone, but my heart is with each person, family, and community that is mourning. As a nation, together, we grieve the lives that have been taken by this dreadful disease,” she said in a statement.

Other senators with the bipartisan bill to hold the moment of silence are Marsha Blackburn, a Tennessee Republican, and Democrats Chris Coons of Delaware and Brian Schatz of Hawaii. Fifteen other senators signed on as co-sponsors.

Schatz said the nation “must mark this dark moment with unity and clarity.”

HARRISBURG, Pa. — Professional sports can resume in Pennsylvania where the governor’s stay-at-home order to stem the spread of the coronavirus is no longer in force, but without spectators, Gov. Tom Wolf’s administration said Wednesday.

Those teams and competitors will be allowed to practice or play in counties where Wolf’s yellow or green designation applies in his stoplight-colored three-phase reopening plan.

To resume, a team or a league must develop a coronavirus safety plan that has been approved by Wolf’s state Department of Health and it must include testing or screening and monitoring of all “on-venue” players and personnel, the administration said.

Fans or spectators cannot be permitted inside or outside the sporting venue property, the administration said.

MINNEAPOLIS — Minnesota Gov. Tim Walz signed an executive order Wednesday that formally implements the next phase of his “Stay Safe MN” plan, which will allow restaurants and bars to offer outdoor dining and salons and barber shops to reopen starting next Monday.

Those businesses must observe capacity limits and follow other safety restrictions. There’s still no target date for allowing restaurants and bars to serve guests indoors.

Walz acknowledged at a news conference that the terms of his order aren’t substantially different from the “cautious, strategic turn of the dial” he announced for these businesses last week.

The governor took note of the grim milestone of the U.S. passing 100,000 COVID-19 deaths on Wednesday. He said the peak in Minnesota is “still a ways off” and that how well Minnesotans comply with health guidelines — including social distancing, wearing masks and staying home when sick — will have an impact.

Many restaurant owners have complained that allowing outdoor-only dining doesn’t give them enough relief from the shutdown that Walz imposed starting March 17, with exceptions for takeout and delivery service.

The governor acknowledged the continuing economic pain but said long dinners with friends in smaller spaces pose one of the higher risks for spreading the coronavirus.

“It was never meant to make people whole, it was one step in the direction,” he said of outdoor dining. But he added that the discussions have given his administration a “jump start” on what the next steps might include.