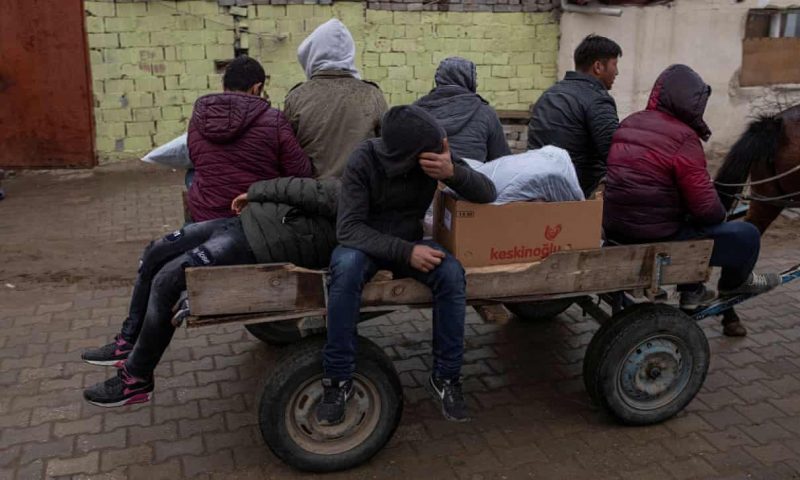 Greece fears a fresh standoff on its border with Turkey after the Turkish foreign minister suggested migrants and refugees would shortly return to the frontier as the two countries emerge from coronavirus lockdowns.

Speaking to a local television station in Antalya, Mevlüt Çavuşoğlu said: “Due to the pandemic, the movement of migrants has slowed down. But they will definitely want to leave after the outbreak is over.”

The statement set off alarm bells in Athens, where analysts are increasingly voicing fears of an iteration of the crisis that erupted earlier this year when the Turkish president, Recep Tayyip Erdoğan, declared the doors to Europe were open and migrants free to cross into Greece.

After a hiatus of almost three months, Greek authorities reported several boats of men, women and children landing on the shores of Lesbos last week.

Some 37,000 asylum seekers remain on the outposts in vastly overcrowded conditions that have been deplored by human rights groups.

As a precautionary measure against coronavirus, Turkey sealed its north-western land frontier, demarcated by the Evros River in mid-March, but only after weeks of chaos and high drama in which thousands attempted to cross the border amid a hail of rubber bullets and teargas fired by elite forces on either side.

In recent days, there has been renewed tension over moves by Athens to extend a 12.5km-long razor wire fence along the frontier in land disputed by Ankara.

“As the region gradually emerges from coronavirus lockdown, we are seeing a rise in tensions on all fronts,” said Angelos Syrigos, professor of international law at Panteion University and an MP in the governing New Democracy party. “It is clear Turkey wants to continue weaponising migrants and refugees to extract European support for its geopolitical goals. My worry is that very soon we could see a new border crisis.”

But Frontex, the EU border agency that is participating in the patrols, has reportedly also predicted that the easing of coronavirus restrictions in Turkey will likely result in thousands of migrants and refugees attempting, once again, to cross into Greece. Internal documents seen by the German newspaper, Die Welt, suggested a mass movement of people towards the Greek-Turkish border and shores opposite outlying Aegean islands once internal containment measures are lifted. The document, dated 5 May, indicated that 262 officers had been seconded to bolster the Evros border region.

In March, the Turkish interior minister, Süleyman Soylu, also warned that Europe-bound migrants would be able to return to the Greek-Turkish land border once the pandemic receded. “When this epidemic is over we would not prevent whoever wants to leave,” he said, after ordering the evacuation of men, women and children from the region.

As home to more than 4 million refugees – more than anywhere else in the world – Turkey has repeatedly threatened to open the gates to Europe, arguing that Brussels has failed to provide adequate funding to host such numbers. The vast majority are displaced Syrians.

Ankara’s deteriorating economy and pressure on Erdoğan himself has underpinned crisis fears. Hostility has risen noticeably in the Aegean and eastern Mediterranean where belligerent rhetoric from Turkey has been backed by brazen overflights over Greek isles and alleged harassment of patrol boats.

Bilateral tensions come against a backdrop of disquieting reports of Greek authorities forcibly sending refugees back to Turkey. Allegations of expulsions have mounted in recent months with human rights activists accusing the government of exploiting the pandemic to engage in extrajudicial deportation of asylum seekers.

“We are concerned about recent reports that have reached UNHCR of informal forced returns at Greece’s borders over land and sea,” said Boris Cheshirkov, the agency’s spokesperson in Athens, describing the allegations as credible.

“We have received reports of testimonies … and have approached authorities to express our concern and ask [them] to investigate and correct these practices if they are confirmed.”

Human rights groups claim conditions in island camps have also worsened as a result of restrictive measures to stem the spread of the virus. Although lockdown policies have gradually been lifted across Greece they are still enforced in holding centres with night curfews still in place.

“We have seen a noticeable rise in all sorts of violence, from tent violence to sexual violence because people are forced to spend much more time in camps,” said Apostolos Veizis, the medical director of Médecins Sans Frontières in Greece. “These people are not treated as human but numbers. The situation for them is utterly inhumane.”

US Home Price Gains Quickened in March as Sales Plunged