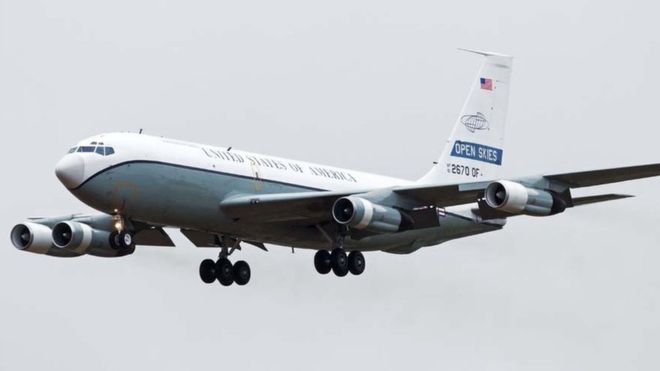 The US has announced it will withdraw from a major accord that permits unarmed aerial surveillance flights over dozens of participating countries.

The Open Skies Treaty came into force in 2002 and is designed to boost confidence and assure against attacks.

But senior US officials said the country was withdrawing due to repeated Russian violations of its terms.

US President Donald Trump later said there was a “very good chance we’ll reach a new agreement” with Russia.

“I think we have a very good relationship with Russia, but Russia didn’t adhere to the treaty,” Mr Trump said on Thursday, adding: “Until they adhere we will pull out.”

The US will formally withdraw from the accord in six months, officials said.

“During the course of this review it has become abundantly clear that it is no longer in America’s interests to remain a party to the Open Skies Treaty,” one official told Reuters news agency.

Some 35 nations are party to the treaty, including Russia, Canada and the UK.

How has Russia responded?

Russia’s Foreign Ministry insisted that it had not violated the treaty and that a US withdrawal would be “very regrettable”, adding that the Trump administration was working to “derail all agreements on arms control”.

“Nothing prevents continuing the discussions over the technical issues, which the US is misrepresenting as violations by Russia,” he added.

He said that any withdrawal would affect the interests of all of the treaty’s participants, who are also members of the North Atlantic Treaty Organisation (Nato).

Earlier this year, US Defence Secretary Mark Esper accused Russia of violating the treaty by banning flights over the city of Kaliningrad and other areas near Georgia.

“I have a lot of concerns about the treaty as it stands now,” he said at the time. “This is important to many of our Nato allies, that they have the means to conduct the overflights.”

It marks the latest effort by President Donald Trump’s administration to withdraw the US from a major global treaty.

Last year, it pulled out of the Intermediate-Range Nuclear Forces Treaty (INF) with Russia.

The INF was signed by the US and the USSR in 1987, and banned the vast majority of nuclear and non-nuclear missiles with short and medium ranges.

China security law ‘could be end of Hong Kong’