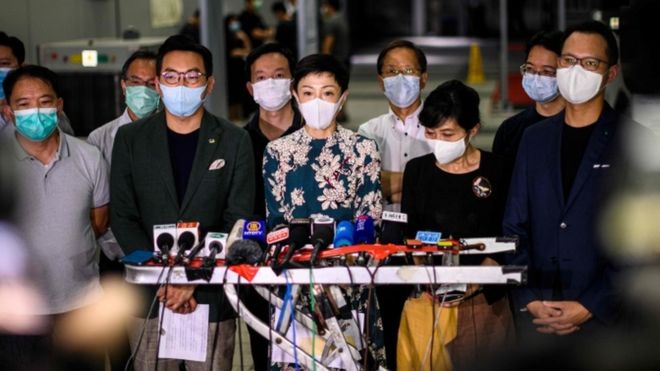 Pro-democracy activists say they fear “the end of Hong Kong”, after China announced plans for a new security law.

The US said the move could be “highly destabilising” and undermine China’s obligations on Hong Kong’s autonomy.

China’s National People’s Congress will on Friday debate the law, aimed at banning sedition and subversion.

Supporters say it is needed to tackle the violence in political protests that erupted last year. Opponents fear it will be used to remove basic freedoms.

Why has the move caused such a furore?

Hong Kong has observed a “one country, two systems” policy and a “high degree of autonomy” since Britain returned sovereignty to China in 1997.

But activists, and the pro-democracy movement, feel that this is being undermined by Beijing.

Last year, millions took to the streets over seven months to protest against a bill that would have allowed extraditions to mainland China. Many of the protests turned violent. The bill was eventually paused, and then withdrawn.

The security law is more controversial still. According to the Basic Law, the territory’s mini-constitution, Hong Kong’s government is required to pass national security legislation. However, an attempt in 2003 failed after 500,000 people took to the streets in opposition.

That is why an attempt now to force through national security legislation – which one legislator on Thursday called “the most controversial [issue] in Hong Kong since the handover” – has caused such outrage.

The BBC’s China correspondent, Robin Brant, says that what makes the situation so incendiary is that Beijing can simply bypass Hong Kong’s elected legislators and impose the changes.

China can place them into Annex III of the Basic Law, which covers national laws that must then be implemented in Hong Kong – either by legislation, or decree.

Pro-democracy activists fear the law will be used to muzzle protests in defiance of the freedoms enshrined in the Basic Law, as similar laws in China are used to silence opposition to the Communist Party.

What have opponents of China’s move said?

A number of pro-democracy figures in Hong Kong, including Democratic Party leader Wu Chi-wai, said the announcement was the death of “one country, two systems”.

Civic Party lawmaker Dennis Kwok said “if this move takes place, ‘one country, two systems’ will be officially erased. This is the end of Hong Kong.”

His colleague Tanya Chan added that this was the “saddest day in Hong Kong history”.

Student activist and politician Joshua Wong tweeted that the move was an attempt by Beijing to “silence Hong Kongers’ critical voices with force and fear”.

Meanwhile, the US state department said that “any effort to impose national security legislation that does not reflect the will of the people of Hong Kong would be highly destabilising, and would be met with strong condemnation”.

President Donald Trump said the US would react strongly if China followed through with its proposals, without giving details.

The US is currently considering whether to extend Hong Kong’s preferential trading and investment privileges. It must decide by the end of the month.

The last British governor of Hong Kong, Chris Patten, called the move a “comprehensive assault on the city’s autonomy”.

A spokesperson for the British Foreign Office said that the UK expected China “to respect Hong Kong’s rights and freedoms and high degree of autonomy”.

What is China’s position?

Sources at the National People’s Congress (NPC) have said that Beijing can no longer wait for Hong Kong to pass its own law, nor can it continue to watch the growth of what it sees as a violent anti-government movement.

One source told the South China Morning Post: “We can no longer allow acts like desecrating national flags or defacing of the national emblem in Hong Kong.”

Announcing the move on Thursday, spokesman Zhang Yesui gave little away, saying the measure would “improve” on one country, two systems.

Mr Zhang said: “National security is the bedrock underpinning the stability of the country. Safeguarding national security serves the fundamental interest of all Chinese, our Hong Kong compatriots included.”

After debating the issue, the NPC – generally a rubber stamp – will vote on it next week. The matter would then not advance until June, when it goes before the Standing Committee.

An editorial in the state-run China Daily said the law meant that “those who challenge national security will necessarily be held accountable for their behaviour”.

In Hong Kong, the pro-Beijing DAB party said it “fully supported” the proposals, which were made “in response to Hong Kong’s rapidly worsening political situation in recent years”.

What is Hong Kong’s legal situation?

The British and Chinese governments signed a treaty – the Sino-British Joint Declaration – that agreed Hong Kong would have “a high degree of autonomy, except in foreign and defence affairs”, for 50 years.

This was enshrined in the Basic Law, which runs out in 2047.

As a result, Hong Kong’s own legal system, borders, and rights – including freedom of assembly and free speech – are protected.

But Beijing has the ability to veto any changes to the political system and has, for example, ruled out direct election of the chief executive.

Hong Kong saw widespread political protests in 2019 but these became much smaller during the coronavirus outbreak.

However, there were chaotic scenes in Hong Kong’s legislative chamber on Monday, when a number of pro-democracy lawmakers were dragged out during a row about a bill that would make it illegal to disrespect the national anthem.

A group of 15 prominent pro-democracy activists also appeared in court on Monday charged with organising and taking part in unlawful assemblies related to last year’s protests.

Open Skies Treaty: US to withdraw from arms control deal