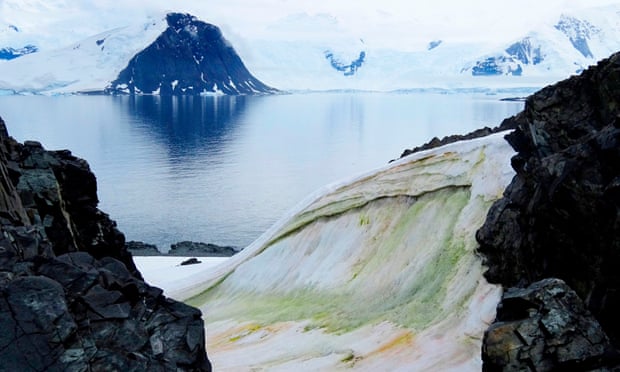 Scientists have created the first large-scale map of microscopic algae on the Antarctic peninsula as they bloom across the surface of the melting snow, tinting the surface green and potentially creating a source of nutrition for other species.

The British team behind the research believe these blooms will expand their range in the future because global heating is creating more of the slushy conditions they need to thrive.

In some areas, the single-cell life-forms are so dense they turn the snow bright green and can be seen from space, according to the study, published on Wednesday in the journal Nature Communications.

Biologists from the University of Cambridge and the British Antarctic Survey spent six years detecting and measuring the green snow algae using a combination of satellite data and ground observation.

The result is the first large-scale algae map of the peninsular, which will be used as a baseline to assess the speed at which the white continent is turning green due to the climate crisis and potentially offering sustenance to other species.

They have already found the algae have formed close bonds with tiny fungal spores and bacteria. “It’s a community. This could potentially form new habitats. In some place, it would be the beginning of a new ecosystem,” said Matt Davey of Cambridge University, one of the scientists who led the study.

He described the algae map as a missing piece of the carbon cycle jigsaw in the Antarctic.

It identifies 1,679 separate blooms of green snow algae, which together covered an area of 1.9 sq km, equating to a carbon sink of about 479 tonnes a year. This is equivalent to the emissions of about 875,000 car journeys in the UK, though in global terms it is too small to make much of a difference to the planet’s carbon budget.

Almost two-thirds of the green algal blooms were found on small, low-lying islands around the peninsula, which has experienced some of the most intense heating in the world, with new temperature records being set this summer. The snow algae were less conspicuous in colder, southern regions.

Scientists have previously observed a change in green lichen and moss, but these grow extremely slowly compared with algae. In future, they will also measure red and orange algae and calculate how the presence of such colourful forms might be affecting the heat-reflecting albedo quality of the snow.

“I think we will get more large blooms in the future. Before we know whether this has a significant impact on carbon budgets or bio albedo, we need to run the numbers,” said Andrew Gray, the lead author of the paper.