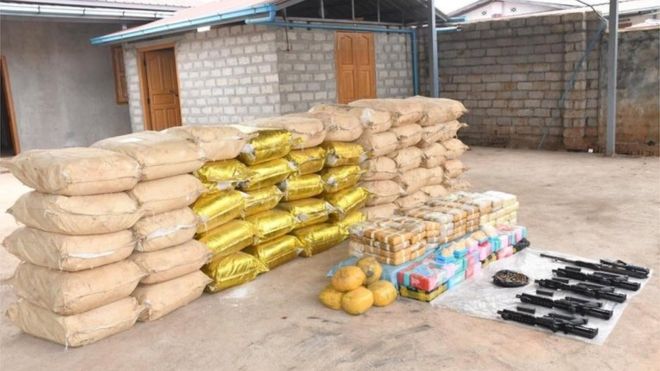 Police in Myanmar have seized South East Asia’s biggest ever haul of synthetic drugs, the scale of which they described as “off the charts”.

Thirty-three people were arrested in the operations, which were carried out between February and April.

Myanmar is thought to be the largest global source of methamphetamines.

The suspects told police most of the drugs were destined for sale within Myanmar and in neighbouring countries, Colonel Zaw Lin of Myanmar’s counter-narcotics agency told Reuters news agency.

More than 3,700 litres of methylfentanyl, a product used to make powerful opioid fentanyl, was also discovered.

Fentanyl is 50 times stronger than heroin and more than 100 times more potent than morphine, and has fuelled an opioid crisis in the US.

On average, 130 Americans die from an opioid overdose every day, according to the US Center for Disease Control and Prevention.

The changing nature of the drug trade

Synthetic drugs are changing the nature of the global illicit drug trade.

Laboratory-made drugs are cheap to produce and – unlike heroin and other traditional drugs – the production doesn’t rely on seasonal harvests.

Many of the precursor chemicals needed to synthesise drugs like methamphetamine and fentanyl are made in labs in China and India.

The United Nations Office on Drugs and Crime has linked the rise of synthetic drug production across Asia to sophisticated crime syndicates that source precursor chemicals from labs in China and India.

The syndicates then work with militia in conflict areas in Myanmar to produce large quantities of illicit drugs in so-called “super labs”.

UNODC South East Asia and Pacific representative Jeremy Douglas said the discovery was a sign of a new trend of synthetic opioid production emerging “on a scale nobody anticipated”.

Myanmar is the world’s second largest producer of opium, after Afghanistan. Its illicit drug trade has flourished because of its mountainous land and porous borders.

It is located in the “Golden Triangle”, an area shared with China, Laos and Thailand, known for supplying drugs, a multi-billion dollar trade.

Between 2018 and 2019, a total of 14 clandestine drug laboratories were seized in Myanmar.

In 2017, a Buddhist monk was arrested in Myanmar and linked to more than four million methamphetamine pills hidden in a monastery.