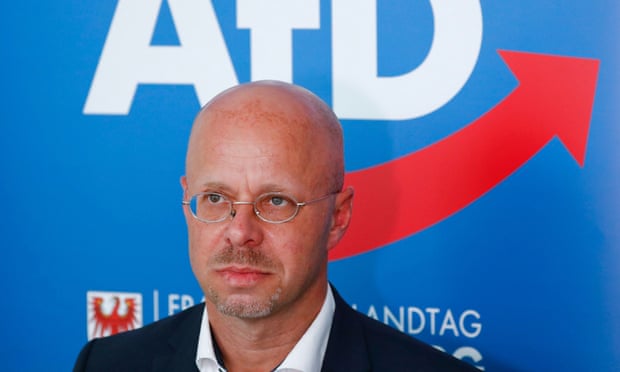 With support for Angela Merkel’s governing coalition surging during the coronavirus pandemic, Germany’s Alternative für Deutschland, the largest opposition party in the Bundestag, has opted for a vicious bout of public infighting that could split the party in two.

The national board of the anti-immigration AfD narrowly voted last Friday to strip party membership from Andreas Kalbitz, a key networker on the rabidly nationalist fringes of the party’s eastern German branches.

Kalbitz, a 47-year-old former professional soldier who heads the AfD in Brandenburg, was ousted over allegedly declining to inform the party of his former membership of a banned neo-Nazi group, German Youths Loyal to the Fatherland, when applying to join the party in 2013. He was last year also revealed to have been named by the German embassy in Athens as one of 14 neo-Nazis who travelled to the Greek capital in 2007 for a far-right rally.

The AfD has struggled to formulate a coherent stance on the coronavirus and failed to leverage a grassroots anti-lockdown movement, and the expulsion of Kalbitz has caused a split through the party’s leadership and set eastern against western delegates.

The move was driven by Jörg Meuthen, an AfD co-leader from the party’s middle-class libertarian wing. The former economics professor represents the kind of conservatives who founded the party in protest against Greek bailout payments in 2013, and who previously defended the more extremist positions held by its politicians in the formerly socialist east by claiming their radicalism was exaggerated by the media.

But since the German domestic intelligence agency’s designation in March of an AfD faction known as the Wing (Flügel) as a far-right extremist group warranting state surveillance, their alliance has been under strain.

“We are a traditional conservative party,” Meuthen told ARD public television. “We need to demonstrate cohesion but we also need to clearly distance ourselves from extreme-right positions.”

On Saturday night, the Thuringian party leader, Björn Höcke, posted a video on Facebook in which he described the push to expel his ally Kalbitz as a “political act” on behalf of Meuthen and a “betrayal”. Höcke, who is seen as the figurehead of the AfD’s nationalist völkisch tendency, added: “I won’t allow the division and destruction of our party.”

Which side of the party will succeed in pushing out the other remains unclear. The AfD’s other co-leader, Tino Chrupalla, and its two parliamentary leaders, Alice Weidel and Alexander Gauland, were reportedly against ousting Kalbitz, who has vowed to take legal action against his expulsion and on Monday announced he would stay on as a member of the AfD’s delegation in the Brandenburg state parliament.

To complicate proceedings further, the original 2013 membership application in which Kalbitz had allegedly failed to acknowledge his neo-Nazi past appears to have gone missing.

The AfD has been the largest opposition force in Germany’s parliament since the 2017 elections. But the party’s fortunes have plummeted during the Covid-19 pandemic, with several recent polls putting its share of the vote below 10%.

For Merkel the pandemic has prompted a political comeback. Her personal approval ratings have shot up on the back of a crisis management perceived as calm and competent, and her Christian Democratic Union party leads the polls on about 38% of the vote.

The AfD, a populist outfit that in the past excelled at pinning the blame for complex geopolitical developments to single actors or ethnic groups, has wavered between accusing the Merkel government of shutting down the country’s borders too late and accusing it of not lifting the lockdown earlier.

On social media, Chrupalla has demanded a “reopening of the economy” while simultaneously opposing proposed measures to control the spread of the coronavirus after lockdown restrictions are eased, such as contact tracing apps, immunity passports and mandatory vaccinations.

The AfD has so far failed to exploit a burgeoning anti-lockdown protest movement that has brought together conspiracy theorists from the far right and the far left.

In April, protest organisers claimed they had registered a new political party called Widerstand2020 (“Resistance2020”) with which they would seek to enter the Bundestag in 2021.

European Airlines Hope to Resume Flights but Outlook Is Dim